Clothes don't make the man, but his tattoos might... The only rule about tattoos is that the design should reflect the kind of person you are. Today, we'll talk about different tattoo styles and what they mean. 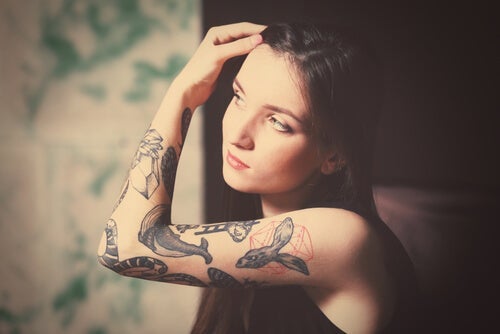 There are many different tattoo styles out there. It’s an art form that’s been around for millennia. Tattoos are another outlet for personal expression, so they mean something different to everyone. But what do they mean to you?

Humans have been tattooing their skin throughout history. Whether it’s a tribal symbol, a sign of protection, military rank, the names of loved ones, or sacred images, tattoos transform the body and tell a story.

The passion for tattoos hasn’t ever diminished. On the contrary, for some people, tattoos are a way of life. All over the world, men and women continue to participate in the ancient art of tattooing. For some, it’s a traditional ritual. For others, it’s an aesthetic pleasure. Getting a tattoo is a rite of passage, and once you have one, it’s hard to stop.

It’s essentially impossible to list how many tattoos exist. A tattoo is as unique as the person who chooses it. One thing is true, however: a tattoo is a lifelong commitment, and it’ll be with you to the end.

That’s why it’s so important to carefully consider your tattoo before you make your final choice. What’s sacred to you? What speaks of your struggles and triumphs, your sense of humor, and your drive to live life to its fullest? Do you live life out loud or do you prefer subtlety and mystery?

What are the best tattoo styles?

Clothes don’t make the man, but the ink he wears is fairly transformative. When it comes to tattoos, the only rule is that you stay true to yourself. With that in mind, take a look at these fifteen different tattoo styles:

This is one of the most well-recognized and popular styles within the tattoo community. They’re beautiful from the beginning, they age well, and they’re full of history. It’s hard to go wrong with this kind of tattoo!

The classical realism movement that started during the Renaissance also influenced tattoo art. The style has become more refined and popular in recent decades.

You might appreciate these realistic tattoos in the form of incredible color portraits, though some artists use black and white as well. There are also beautiful representations of nature.

This style is very popular right now. Those looking for something new, something that represents this new millennium, enjoy watercolor tattoos.

They look like watercolor paintings, but appearances can be deceiving. Watercolors are easy to apply to paper or canvas, but recreating the effect on the human body isn’t easy. Nevertheless, tattoo artists are creating all kinds of beautiful and poetic pieces using this innovative approach.

Indigenous body art, or tribal tattoos, are the oldest in the world. They can be traced back to thousands of years. This tattoo style actually encompasses many styles, because there are as many trends and designs as there are indigenous communities in the world.

The “tribal” category contains a huge variety of tattoos. While they’re all unique, they tend to be black and use already designed patterns as their base.

Don’t let this name fool you. The new school isn’t that new anymore. It reached the height of its popularity in the 80s and early 90s and it isn’t in high demand these days. That’s probably due to the fact that it’s very much a product of its time. These tattoos are cartoonish, usually icons of popular 80s and 90s entertainment.

This style doesn’t take itself too seriously. The images are usually drawn as caricatures, with exaggerated features and shapes. If you’re the kind of person who wants your body art to channel the spirits of Ren and Stimpy, this might be the style for you.

Neo-traditional tattooing is an evolution of the traditional style. These tattoos are similar to traditional tattoos with their use of bold lines and vibrant colors, but they have a dense and rich aesthetic and tend to use a broader color palate.

Neo-traditional artists draw a lot of inspiration from the Art Nouveau and Art Deco aesthetics. Pieces in this style are recognizable for their exuberant decorative detailing, as well as the use of flowers and animals.

The traditional Japanese style in tattoo art is inspired by woodcuts that were popular in the 17th and 18th centuries among the business class. Consequently, the icons of this style are characters from Japanese folklore.

Fantastic creatures, lotus flowers, and Japanese letters come together to create the ultimate tribute to Eastern culture. Every tattoo in this style tells something about Japan’s rich history. Beyond the dramatic smoke and waves of these tattoos, the rich history behind the style is what makes the designs so powerful.

This style encompasses a wide variety of tattoo art, since it includes almost any design done exclusively in black ink. There’s a little bit of everything in this category, from highly detailed designs to ancient sacred geometry. It’s a truly broad field.

Of all the different styles, blackwork is the one that lends itself the most to experimentation. In tattoo art, blackwork leads the Avant-guard.

Do you have a favorite saying or word? A lot of people use tattoos to take those words with them everywhere they go. Quotes look better in a simple font, while single words look great embellished.

A lot of people like to tattoo quotes and words on their forearms, upper chest, or lower back.

Pointillism tattoos take dot work to the next level. Creating a dotwork tattoo requires significant skill, but pointillism pieces are even more challenging.

With this technique, areas with a high-density of dots make it possible to do impressive shadowing and mixing. These tattoos are usually done in black, but you can add color for a different effect.

You have to take a closer look at these tattoos in order to appreciate their complexity. Tattoo artists can create such incredibly realistic illusions with their ink that you could fool people into thinking you have a hole in your hand.

Is your arm actually carved out of wood? These tattoos make people stop and question what they’re seeing.

Simple. Short and sweet. Discreet. A minimalist tattoo is a rejection of the more elaborate styles in exchange for a simple word or small image.

People often choose these for their symbolism; they don’t necessarily mean anything to anyone else. If you’re looking for a way to express yourself without drawing a lot of attention, this is a great choice.

This is something new on the tattoo sign. Ultraviolet light ink absorbs light during the day and glows in the dark.

You can use this type of ink to highlight an existing tattoo or get a new tattoo that only shows up at night. This style is a great reminder that not everything is as it seems and people’s personalities sometimes change when the lights go out.

If you want something that’s going to get people’s attention, this might be the style for you. Your skin is either flat or curved, but today’s tattoo artists can bring life to almost any image you have in mind.

If you like gears or just the Terminator movies, you’ll probably like this style. These tattoos usually include 3D gears, cables, metallic pieces, and more, designed to look like they’re just under the surface of your skin.

Maybe you’ve always wanted a robot arm or leg, but they’re just too expensive. Here’s one way to make your wish come true.

Now that you’re familiar with different tattoo styles, are you ready to get one yourself? Remember to choose wisely, as it’ll be with you forever.

The Psychology of Art: Concepts and Characteristics
The psychology of art opens the door to another vision of art full of the human psyche. We'd like to give you part of the key. Read more »
Link copied!
Interesting Articles
Culture
How Does a Time Change Affect You?

Two weekends per year, a good part of the northern hemisphere undergoes a time change in order to take better…

The brain and spinal cord are surrounded by three membranous layers: the meninges. The three meninges are the dura mater,…

You've probably heard someone say that someone has broken their heart. Also, you may have felt identified with songs about…