Does Telepathy Exist? Is Mind-Reading Real? 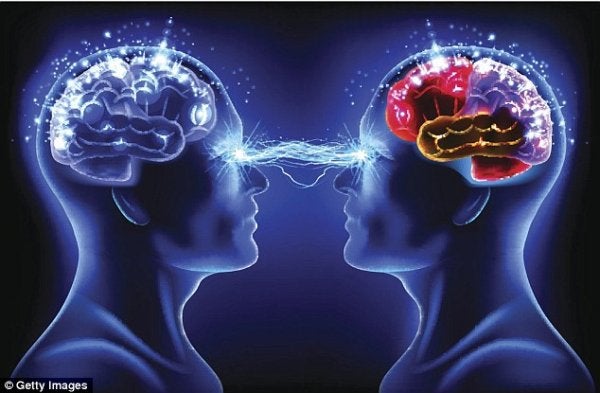 No one talked about telepathy until the twentieth century. No documents or ancient texts make reference to this phenomenon.

What we can say for sure is that it has been a source of controversy ever since people first broached the subject. So far, science denies its existence. At the same time, we still hear stories about telepathic experiences.

We define telepathy as the transmission of thoughts over some distance without the use of any kind of technology. It is a kind of “wireless communication” between two human brains. Thousands of people claim to have experienced it, but no one can reproduce the phenomenon in a lab.

“If telepathy would radically change the way humans communicate, then ‘telempathy’ would revolutionize humans’ sensitive world.”

Scientists indicate that telepathy isn’s plausible from a physics point of view. No section of the brain is able to act as a communication receptor or transmitter over any kind of distance. Nor does the electromagnetic potential of the brain have the ability to transport information. Lastly, there are no means by which the brain could do that, at least as far as we know.

According to classical physics, telepathy is impossible. However, in the context of quantum physics, things look quite different. In fact, many well-known physicists talk about the phenomenon. They are open to the possibility of telepathic communication. This particular case, then, is not closed.

We mentioned before that there are thousands of people who claim to have telepathic experiences. In light of that, some scientists decided to study the phenomenon.

Karl Zener carried out one of the most famous experiments.  With five playing cards, he did a rigorous statistical monitoring of his participant group. However, the results of this experiment didn’t allow him to draw any solid conclusions.

Montaque Ullman and Stanley Krippner from Maimonides Medical Center in Brooklyn, New York, also did an experiment about telepathy. Theirs looked specifically at telepathic communication during sleep.

In many cases, the transmitter’s mental image appeared during the receptor’s dreams. In spite of these findings, the project was abandoned.

Another famous study is known as the “Ganzfeld Experiment.” The researchers did a total of 88 experiments between 1974 and 2004.

The experiments showed that telepathic communication worked about 37% of the time. The results were very controversial, so they did another set of experiments that showed a 34% success rate.

These results are statistically significant but in practice, the experiments generated a lot of doubt. For that reason, researchers eventually abandoned the project.

Rupert Sheldrake is a biochemist and physiologist. He did another telepathic experiment at the University of Cambridge in 2003-2004. He carried out 571 telepathic communication attempts with 63 volunteers. His success rate was 41%. He published his findings in several scientific journals.

The most controversial aspect of telepathy is that it would defy the classical laws of physics and other sciences. The possibility that it exists would call into question axioms we take for granted.

It is impossible to produce processes in the brain without any internal or sensory stimulation to trigger them. At least according to conventional laws of physics and neurology.

According to conventional science, thinking is a biochemical process. As a result, it doesn’t happen if there is no material stimulation. And telepathy is exactly that: the absence of a material stimulus.

So, it would seem that these two concepts are mutually exclusive. Nevertheless, hypotheses in quantum physics allow for the possibility of other types of material interaction.

Roger Penrose, a physicist, mathematician, and expert on the Theory of Relativity, posits the existence of a quantum biophysics of the mind.

Stuart Hameroff, an anesthesiologist at the University of Arizona, also signs onto this theory. The Penrose-Hameroff hypothesis opens the door to understanding telepathy from a scientific point of view. Nevertheless, what they propose is a new field of research rather than any sort of conclusion.

Many people report experiences with telepathic communication. There is, and always has been, an arrogant certainty on the part of those who defend conventional scientific hypothesis. That prevents any significant research from happening (aside from the isolated cases that we’ve mentioned.)

Another problem telepathy has is that people associate it with manipulation or even magic. So, it’s up to science to determine if it will end there, or if we can open a door to a new room full of fascinating questions.

There are moments in life when music nurtures us even more than food does. The lyrics may hurt us, may hurt our soul, or fill us up. Listening to music can…

Some call it a variant of the so-called "Peter Pan Syndrome." It develops when a man between 28 and 38 years…

Culture
Olive Oatman, the Twice-Captured Woman with the Blue Tattoo

Olive Oatman is known as the mysterious woman with the blue tattoo on her chin. Kidnapped as a child by the…

Culture
Can Your Gaze Induce an Altered State of Consciousness?

The first time gaze was mentioned as a factor that affects other people's consciousness was two centuries ago. Franz Anton…