Peter principle reminds us that no matter how competent a person may seem, promoting them may not be the best move. On occasions, promoting an employee leads to inefficiency. 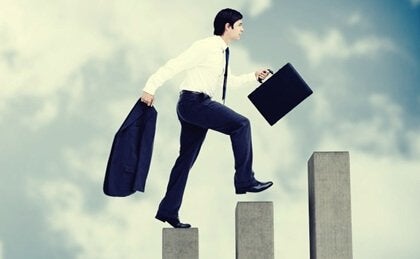 On many occasions, the fact that a worker deserves a promotion doesn’t mean they’re prepared for it or that it’d be a beneficial option for them or the company itself. This is what Peter principle is all about. According to this theory, promotions can be a setback. Sometimes, the worker has to assume challenges they’re not ready to face. Maybe they don’t have enough resources to handle them or they don’t know how to manage their emotions appropriately.

Peter principle has existed for over 60 years and it’s still relevant to this day. In the late ’60s, doctors Laurence J. Peter and Raymond Hull from the University of Washington wrote a book called The Peter Principle: Why Things Always Go Wrong.

It was very impactful and controversial. It talks about those mistakes that they, more often than not, saw in any company, educational center, or work scenario. In the book, they established how promoting a worker can sometimes be a big mistake.

Peter and Hull also stressed the importance of placing only trained people in positions of power. Placing a subpar employee in a power position can greatly jeopardize a company.

When this happens, it’s not uncommon for an organization to go downhill. This leads to constant discomfort, unhappiness, low productivity, and a high level of incompetence. This, as a result, leads to bad decision-making.

“If you don’t know where you’re going, you will probably end up somewhere else.”

What does Peter principle consist of?

Peter principle can be summed up in one basic idea: in each company’s hierarchical structure, workers will be promoted to a position they’re not prepared for and they’ll occupy said position for the rest of their career. In turn, this implies another important aspect: managers who aren’t able to successfully respond to the responsibilities they assumed.

This theory has many detractors and supporters. Researchers at Harvard Business School carried out a study where they pointed out that Peter principle didn’t exist in ‘every’ company or in as many scenarios as we think.

The challenge of occupying positions of responsibility

Many employees are highly effective in what they do. Therefore, it’s very possible that their boss may want to promote them at a given time. Their superior may promote them to a position that’ll help the company move forward in various aspects.

That being said, Peter principle often causes leaders to suffer from high anxiety levels and slowly but surely become aware of their incompetence. Others, however, disregard the impact their bad decisions may have.

Can it be avoided?

Peter principle has been present in the business world for several decades now, and, as we know, this particular world is based on competition between companies and employees. This means that bosses oftentimes prefer to promote aggressive, authoritarian, and even charismatic employees instead of those that are more skillful.

According to the authors of this principle, the most striking aspect is that bosses rarely ever fire these people, no matter the damage they’ve done to the company or how unproductive and negative they might be. This is why every manager, officer, or employee should take the following aspects into account.

What kinds of promotions lead to Peter principle?

How to avoid Peter Principle

Powerful executives and entrepreneurs use the following strategies in order to avoid Peter principle:

It’s important to apply these steps in order to avoid making decisions that may lead to a negative work environment.

Psychology
Life Is Not Waiting For You: How To Live In The Here And Now

Life isn't waiting for you. It isn't all set out in the calendar of life. Life is happening to you right…

Some people have little to no ability to handle their fears, emptiness, and frustration. They have the irresistible need to control…