No to Restrictive Dieting, Yes to Healthy Habits

Is restrictive dieting healthy? Are there any other ways to lose weight? You may not know it, but an adequate change in your daily habits can help you more than you think. Find out how! 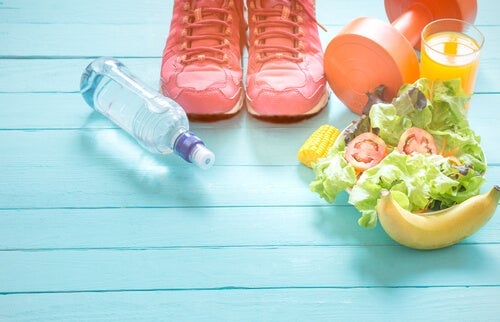 Yes or no to restrictive dieting? That’s the question. Are you the kind of person who starts a diet only to feel guilty and frustrated? Do you feel that you’re only half-enjoying yourself?
Here are some tools to help you understand what’s behind the diet culture. Also, how to discern popular miracle diets from healthy lifestyle habits. Say goodbye to restrictive dieting and take care of yourself. These are the keys to breaking this vicious cycle.

What’s behind the diet culture?

The meaning of the word “diet” comes from Greek. They defined as “the types of food a person eats on a regular basis”.
Over the years, this word came to mean many more things. It’s become a concept that’s not only linked to diet but also to a way of life. One that sometimes strays away from a healthy life. Also, one that had a negative impact both on physical and mental health.
It’s easy to see how the word “diet” can influence your emotional state. At some point, its meaning became polarized and, if you’re on a diet, you’re restricting yourself. But if you’re not, then you can eat anything you want.
This polarity, imposed by the media and the diet culture, can have a negative impact on your emotions and quality of life. It can keep you from changing and maintaining good eating habits and a healthy lifestyle. Why is this?

Taking care of yourself isn’t only about eating healthy food. It also implies integrity and harmony. And the impossibility of separating physical and emotional aspects as independent elements. Both at a general level and when changing your eating habits.
For example, take an overweight person who wants to lose some pounds. They instinctively know they should restrict their food intake. This is because they think that the less they eat, the faster they’ll reach their goal. But restrictive dieting is harmful to their health. It doesn’t take into account important aspects of a person, such as their emotions.
According to studies, people are better off when they integrate psychological elements. They should go hand in hand with a diet program. A lot more so than focusing on following a restrictive diet.
Thus, there’s much improvement in mixed programs. Not only in the level of self-esteem but also in the perception of body image and self-efficacy. These programs also improve motivation levels and adherence to a process of change.

Characteristics of the restrictive dieting mentality

The erroneous belief that you must follow a restrictive diet to lose weight must end. The first thing you must know is how diet culture works. Also, about the negative thoughts and emotions it instills. What are the characteristics of the diet mentality? These are the most general:

Say no to restrictive dieting and yes to healthy habits

The concept of health is no longer the absence of disease and has become a global state of well-being, both physical and psychologically. Thus, there’s another definition for “healthy habits”. It’s the pattern of behaviors you assume as your own, one that repeats over time and produces a positive effect on your health.
The main characteristics that define healthy eating habits are:

You now know the main differences between the diet culture and a change in eating habits. Still, it’s common for doubts to arise about time and immediacy. You must also keep in mind that changing habits takes time. Thus, before you feel like you have to begin a restrictive diet, reflect on how many years you’ve invested in this vicious cycle.
Is it possible to take care of yourself by focusing only on what you see? Will punishing yourself with restrictive diets that can’t last forever impact your self-esteem? The answer is clear: no, at least not in a healthy way. But how about changing your focus? What if you invest in something different? Something like learning to take care of yourself without diets?
Your Brain Will Thank You for Eating Healthy
The greatest link between your body and the food you eat is not your digestive system, but your brain. Your diet directly affects it. Read more »
Link copied!
Interesting Articles
Healthy Habits
Sleeping Poorly Can Make You Feel Lonely

Serotonin is a neurotransmitter that our neurons produce in order to communicate amongst themselves. It's in different parts of our central nervous…