Mahatma Gandhi was a spiritual and political leader capable of leading the civilian population of India through resistance and massive nonviolent civil disobedience. 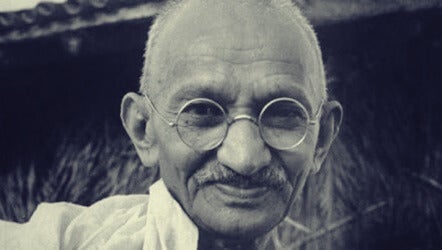 The legacy of Mohandas Karamchand Gandhi, better known as Mahatma Gandhi, will always live on. He was a man who wanted to start a peaceful revolution to defend the civil rights of his country. He became a political and spiritual leader whose nonviolent disobedience inspired the entire world.

October 2 is International Day of Non-Violence. On this day, people reflect on what the leader of the Indian independence movement accomplished in the middle of the 20th century.

During his nearly three decades of peaceful activism, he didn’t just yearn to free his people from the British Raj. He defended social justice and aspired to transform economic structures. Thus, he taught society that mutual understanding could be possible between different religions and peoples.

From naive lawyer to brilliant activist

Mohandas K. Gandhi was born in Porbandar in 1869. His father was Prime Minister of Gujarat, and his mother belonged to the branch of Hinduism. In addition, she was a woman distinguished for her tolerance and for the defense of peaceful coexistence between all religions.

He grew up in a privileged environment in every way. He was financially well-off. His mentors instilled spirituality in him early on. He was vegetarian, fasted often, and was committed to his culture.

However, his family selected him out of his two older brothers to improve his academic training. For this reason, they sent him to London in 1888 to study law. This stage in his life helped build his identity, social activism, and philosophical conviction.

In England, he was in close contact with the circle of theosophists. They initiated him in the Bhagavad Gita, the sacred book of the Hindus, which inspired him decisively in his religious ideals and principles.

After he got his degree, the inexperienced lawyer went to South Africa, a divided and unstable country made up of multiple colonies governed by the British and the Dutch. In this context, a decisive stage in his life began. Then, the young lawyer suddenly became a strong defender of equality and freedom.

Actually, in South Africa, the four characteristics that defined Mahatma Gandhi arose. He was a:

The fight for the independence of India

When Gandhi returned to his country in 1915, things had flared up in India. Also, they were about to pass a law that would forbid suffrage to Hindus. At this time, he began to apply the same social activism that he started in South Africa. Thus, he called his people to resist and exercise Satyagraha (the creed of non-violence).

The world, in turn, brought the echoes of World War I and he began to lay the foundations for peaceful independence in India. To do so, he resorted to a tactical and intellectual approach as novel as it was inspiring for multiple generations. Mahatma Gandhi created a farm in the city of Ahmedabad to gather his disciples.

As you can see, he became a spiritual leader who inspired multiple communities. Little by little, the peaceful settlements multiplied, which in turn sparked the engines of a great revolution.

An effective strategy was to stop cotton production, a key piece for the British textile industry. Then, he did the same with the British salt monopoly. Civil disobedience campaigns took thousands of lives and cost them several years in prison. However, they achieved their goal: the independence of India as a British colony happened on August 18, 1947.

Just a few months later, on January 30, 1948, Nathuram V. Godse, a Hindu extremist, assassinated Gandhi in a crowd. He was 78 years old.

Satyagraha was a word Gandhi invented to represent his fight, based on the firm conviction that he shouldn’t resort to violence.

Thus, this humble and firmly obstinate man defended social rights (to the point of being nominated five times for the Nobel Peace Prize). He insisted that life is indivisible and that as such, it’s inconceivable that one person could cause any harm to another. Therefore, any active fight for the good and defense of those who suffer must be based on satyagraha, a dimension that included the following principles:

Gandhi produced an undeniable change in 20th-century thinking. He left an inspiring trail, just like Martin Luther King and Mandela. These types of legacies are, undoubtedly, a challenge for this era. Thus, collecting witness accounts and learning from these figures is something everyone should reflect on to improve the course of civilization.

“The weak can never forgive. Forgiveness is the attribute of the strong.”