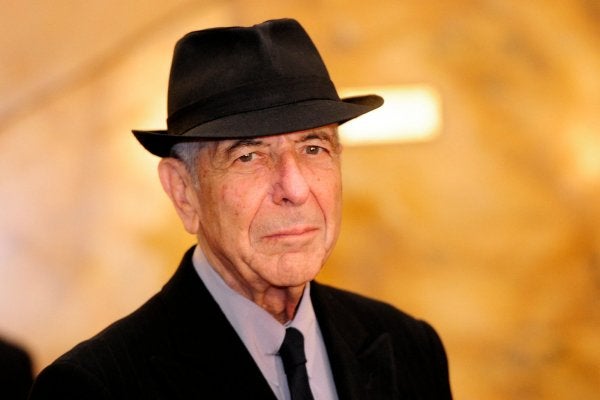 At age 82, and with a long life behind him, Leonard Cohen has left us. He already knew that his heart would stop soon; in one of his last interviews with The New Yorker he said that he was ready to die, and that all he asked was to have enough time to finish the work he had started.

Just a few days before that interview, we learned that the Swedish Academy had granted the Nobel Prize in Literature to Bob Dylan, and some people complained, not without reason, that if anyone had fused poetry with music, it was Leonard Cohen. That if anyone deserved such a prize for their lyrics, without undervaluing Dylan, it was Leonard Cohen. Today, now that he’s gone, those of us who have had the fortune of enjoying his art think that it would have been a beautiful and well-deserved tribute.

From this little space, sadder today because of his departure, we’d like to pay our respects to him with you.

A life dedicated to music and lyrics

Although he started off with the acoustic guitar, upon hearing a Spanish guitarist, he fell in love with the chords that came out of the classical guitar. Another one if his idols was Layton, of whom he said “I taught him how to dress, he taught me how to live forever.”

After finishing a graduate program in New York, which he described as “passion without flesh, love without climax,” he returned to Canada, specifically Montreal, where he wrote poetry along with other jobs that allowed him to earn a living at the time.

A restless traveler, he met the woman who would be the love of his life on the island Hydra, in the Aegean Sea. Marianne Ihlen ended up separating from her then husband, a Norwegian man named Axel Jensen, with whom she had a son. The story, as she tells it, is that she was crying in a grocery store on the port of Hydra when a stranger took pity on her and invited her to join him and his friends. That stranger was Leonard Cohen, and a passionate affair began that would last, with ups and downs, for seven years.

In fact, So Long, Marianne was initially entitled Come On, Marianne, as an attempt to get her to give him another try. It was a love that would never end, as deep as his love for words, whether in literature, poetry, or music.

Marianne passed away last July, a victim of leukemia, and left an empty space in Cohen that he couldn’t fill, nor did he want to. “Know that I am so close behind you that if you stretch out your hand, I think you can reach mine,” he wrote in a letter to the love of his life.

The Prince of Asturias Award and his vision of poetry

When he was granted the Prince of Asturias Award in 2011, he left us a speech that will be recorded in the memory of all those who love poetry. Cohen, with his elegant suit and crooked smile, using the peaceful tone of someone who was separated from life, said that the awards he had received for his work as a poet were somewhat misleading.

Why? He thought that the poetry came to him, and therefore was something that he had no control over. In this sense, he stated with his particular sense of irony that if he knew where it was, he would go looking for its company more often. So, he sort of felt like a charlatan for receiving an award in something that he believed was natural, not meritorious.

Whether it deserved merit or not, what’s clear is that his work is indisputable and his quality as a writer has been a gift to us. In this short speech, he also said that he had a Spanish guitar for 40 years, and that he had felt an urge to smell it before leaving for Spain. He said that when he smelled it, he had the sensation that wood never dies.

Through his work, his genius, he ensured that for us, he would be like wood; in our hearts, he will never die.

Poetry: A First Aid Kit for the Soul

Throughout the course of our lives it is common that we find ourselves facing many losses. Healing from a loss is a lesson that all of us have to face sooner…

Wellness
Control Your Anger before It Controls You

Sometimes it takes little for us to lose our temper and for anger to take control. Maybe we're extremely tired and feel more irritable…

Wellness
The Leap Between Being Right or Being Happy

"Two close friends began a trip. When night fell, they went to sleep under a tree next to each other.…