One of the most renowned José Saramago's essays is “Blindness”, a literary piece that invites the reader to reflect on the human soul and on what's invisible to the eye. 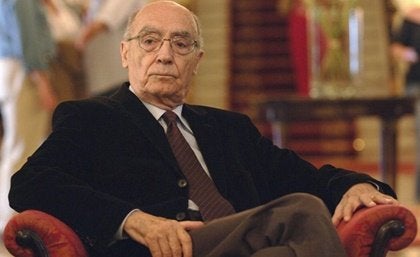 José Saramago was the most outstanding voice of Portuguese literature. His astounding works won him the Nobel Prize in Literature. For example, works such as Blindness are cathartic and inspire the reader to reflect.

People often say that Saramago was a troublemaker. He never stopped denouncing injustice and he always gave his opinion on conflicts of the time. Saramago actually described himself as a passionate writer, someone who needed to uncover each little hidden thing, even if that meant facing the true monsters of this world.

His pursuit of truth and his efforts to make people reflect shaped his unique literary style. He used parables full of imagination, irony, and compassion to paint a reality that people couldn’t ignore. Today, new generations keep rediscovering his voice and admiring his daring personality.

He’s one of the most distinguished Portuguese writers, among others such as Fernando Pessoa. José Saramago’s magical and curious work encourages people to analyze current issues through his own eyes.

“Words that come from the heart are never spoken, they get caught in the throat and can only be read in one’s eyes.”

A wise man from a humble family

José de Sousa Saramago was born on November 16th, 1922 in Golegã, Portugal. His parents, José de Sousa and Maria da Piedade, were two humble peasants. When Saramago was only two years old, his parents decided to move to Lisbon to achieve financial stability.

Once they settled down, his father started working as a policeman. Saramago went to technical school until his parents could no longer afford his education in the following years.

After that happened, he had no other option but to work in a mechanical blacksmith workshop. But he didn’t just focus on this job. Saramago dedicated his free time to becoming a scholar by his own means. He never stopped reading, learning, and, of course, writing. In 1947, when he was only 25 years old, he released Land of Sin. That same year, his daughter Violante was born as a fruit of his first marriage.

A committed writer and journalist

José Saramago started translating Hegel and Tolstoy’s work into Portuguese in 1955. At the same time, he worked on giving a more mature tone to his style so that his writings would become successful. And although he was truly talented, no editor dared to publish his works.

After Skylight was rejected, Saramago took a few years to start trying again. In fact, it wasn’t until 1966 that he made another attempt with Probably Joy and later on with The Year of 1993. Both writings were acknowledged by publishers.

Once he finally achieved the success he wanted, he started his career as a journalist. Saramago worked as assistant editor of the newspaper Diário de Notícias and then of Diário de Lisboa, where he became assistant manager and political commentator.

Amid the Carnation Revolution of April 25th, 1974, Saramago decided to focus solely on his writing. In 1976, he published The Notes and The Lives of Things.

By the 80s, José Saramago was already an internationally renowned author. He achieved widespread recognition with Baltasar and Blimunda (1982), The Stone Raft (1986), the controversial The Gospel According to Jesus Christ (1991), and Blindness (1995).

Saramago managed to refine his writing even more, meaning his books became even more daring. In 1998, he won the most prestigious award: the Nobel Prize in Literature.

At the time, he was going back and forth between Lisbon and Lanzarote in the Canary Islands, which was the home of his wife, Maria del Pilar del Rio Sanchez, a Spanish translator and journalist.

José Saramago died of leukemia on June 18th, 2010 at the age of 87. He had just started writing a new novel, of which he left the first 30 pages.

“‘I don’t think we did go blind, I think we are blind, Blind but seeing, Blind people who can see, but do not see.” With these words, José Saramago shaped one of the most interesting argumentative metaphors of his work. In Blindness, he talks about the inability of human beings to recognize each other as equals. He turns humans into infamous beings, creatures that need guidance to understand and survive the world.

This book is a deep reflection on the human soul. It’s a dystopian novel and, whoever reads it, can no longer ignore the blindness of our society, which spreads like an infection in the book.

Only one of the main characters in the story is able to see: a woman who decides to be with her husband in his blindness. She becomes the eyes that try to help the rest of the world. However, the environment is purely oppressive. Soldiers shoot whoever gets near the ill. A dictatorship has taken over. Chaos prevails and hope slowly disappears.

Blindness shows that the human soul is unwilling to see. The inability to recognize each other as equals leads to selfishness, conflict, and fear. Blindness is an impressive book. It’s one of the greatest literary works that’s definitely worth reading.

Jean-Paul Sartre: Biography of an Existentialist Philosopher
Jean-Paul Sartre was an existentialist philosopher who wrote some of the best works of literature in history. Read on to learn more about his work and life! Read more »
Link copied!
Interesting Articles
Culture
Parametric Tests: Definition and Characteristics

Culture
The Rose and The Toad: Inferiority and Superiority Complexes

Once upon a time, there was a beautiful, red rose. She was the loveliest rose in the entire garden. However,…

Culture
When a Parent Has Paranoid Personality Disorder

Although it's not often talked about, some children have parents with paranoid personality disorder. These children suffer the effects of unstable family relationships, scarring…