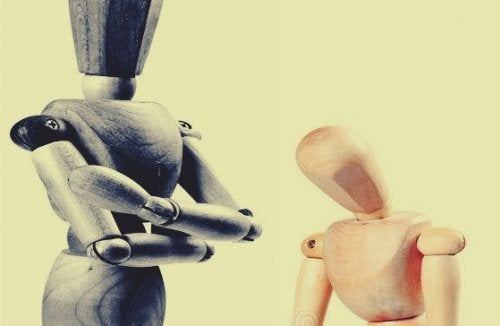 The master-slave dialectic is Georg Hegel‘s theoretical construction. It’s considered one of the key elements of his philosophy that also influenced other philosophers in later years. Not only did it become the foundation for Karl Marx‘s materialistic dialectic, but it also had a strong influence on psychoanalysis.

For Hegel, human reality condenses into what we call universal history. What has marked this history is the unequal relationship between human beings. Some are tyrants, while others are tyrannized. That is what the master-slave dialectic is based on. What has moved history is the conflicts between humans, which has resulted in inequality.

According to Hegel, dialectic is a form of reasoning in which two theses are opposed. At the same time, this leads to new concepts. There’s a thesis that raises certain reasonings, which is followed by an antithesis that exposes its problems and contradictions. The synthesis arises from the dynamics between the thesis and the antithesis, and it becomes a solution or a new perspective on the matter.

Desire and the master-slave dialectic

In Hegel’s master-slave dialectic, desire plays a very important role. This philosopher stated that animals have a desire that is satisfied with an immediate object. The animal isn’t aware of what it desires. However, this is different for human beings.

For Hegel, history equals the history of social relations, which unveils when two human desires are facing each other. What human beings really desire is to be desired by others. In other words, they want to be recognized by others. This means that human desire is fundamentally a desire for recognition.

Human beings want others to give them an autonomous value, a value that’s their own and that makes them different from others. This is what defines the human condition. Therefore, according to Hegel, the main characteristic of human beings is imposing themselves on others. Self-consciousness is created only when others recognize them as autonomous beings. At the same time, self-consciences wage a fight to the death between them.

The history of Hegel’s perspective

Hegel constructed his master-slave dialectic based on these concepts. It proposed that, from the first moment of history, two figures are formed: the master and the slave. The first one imposes themselves on the second. They do it by not recognizing their desires. The master objectifies the slave, who then has to give up their desire for recognition, basically out of fear of dying.

Thus, a form of consciousness arises in the dominated. They begin to recognize the other as the master and starts seeing themselves as the slave. Therefore, they’re unable to shape their self-consciousness; they just assume that the master’s opinion is all that matters. This constitutes the essence of the master-slave dialectic.

All of this has important repercussions on production. The master doesn’t come into contact with the raw material or the “thing” that the slave transforms with their work. In turn, the slave comes into contact with it only to transform it; but it’s not theirs and is not intended for their consumption. It’s kind of like the worker who makes bricks but doesn’t own a house.

What Hegel proposes is that the dialectic of history is the dialectic of the master and the slave. Since the beginning of history, there have been dominators and dominated people. The master is a recognized entity, while the slave is in charge of recognizing. The slave stops being an autonomous entity and becomes something shaped by the master.

The master-slave dialectic is a concept that marked a before and after in the history of philosophy. It’s still valid no matter how much other people have studied and reinterpreted it.

Psychology
5 Expressions We Shouldn't Use

Some expressions are designed for hate. They're words or statements people almost always use in moments of anger, or with an…