Handwritten Notes: The Power of the Personal Touch

Although it's an almost forgotten practice, handwritten notes or letters can still give us great joy when we receive them. The power of a handwritten "thank you" note, or the ink of a pen joining the letters of the words "I love you", leave an indelible mark on our hearts. 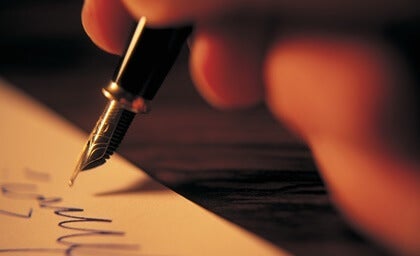 Handwritten notes have real power. Why? Because of the deliberate act that starts from the heart and finishes on paper. Because of the ink that expresses our feelings to say thank you, I love you, or I miss you. Most people have forgotten all about the healthy art of writing and how this practice, immortalized in simple notes, postcards, or letters, brings smiles and great joy.

However, this doesn’t mean that our instant messaging, whether they be WhatsApp messages or any other social media, is any less valuable. We got used to all those “good mornings” or “how are yous”, and they’ve come to shape our day-to-day lives and our contact with the people we care about. This undoubtedly has an impact on our emotional well-being.

However, handwritten notes have another kind of meaning and significance. They’re enduring, require effort, and the detail involved intensifies any message. Sadly, it’s something we don’t see very often.

We aren’t talking here about a simple postcard that one can send for Christmas or for a birthday. We’re referring to a handwritten message, to thank a friend for being so special to us, for example.

They may be full of words to tell a colleague that they’re worth their weight in gold. It may be that post-it note that we put in our partner’s suitcase or between their clothes to surprise them with an “I love you”. Or, it may be a sincere and friendly letter to our parents, siblings, or grandparents to tell them just how much they mean to us.

Amit Kumbar, professor at the University of Texas at Austin in the United States, conducted a curious and striking study on the effects that handwritten notes could have. The work was published in the journal Psychological Science and revealed some thought-provoking data.

Not everyone appreciates or understands the power of handwritten notes

In this research, Dr. Kumbar and his team asked a large sample of people to write thank-you notes to people they knew. They were also asked to do two other things. The first was to predict what effect this gesture might have. Secondly, they were asked to write down the response of those who had received the notes.

Something that became clear from this experiment is that some people don’t understand how important this practice is. In fact, some of them felt a little uncomfortable because of the very simple fact that they weren’t used to saying thank you or to openly showing their feelings.

Doing it in writing wasn’t easier for them either. The experimenters defined this behavior as biased selfishness.

Writing these handwritten notes was, for most people in the experimental group, an exercise in well-being. They imagined that such a gesture would be received positively. They predicted this positive effect and that made them more enthusiastic. Both the senders and the receivers found it to be a very positive experience.

Moreover, we need to mention the surprise factor. Writing notes by hand to say thank you, to show appreciation, to say “I love you” or to show you admire someone, is not at all common. It was a positive social act that many people experienced in a very positive way.

We don’t expect anything in return

When we send a message via Whatsapp, we usually expect two things. The first is for the person to read our message and to see the blue tick sign. Any delay in seeing this symbol can often cause anxiety and even restlessness in many people. The second thing is that we want is an answer. Sometimes, a simple emoticon is enough.

However, the same isn’t true of handwritten thank-you notes. It’s an old-fashioned exercise. We don’t know when the receiver will read the message. We won’t receive a notification, nor a blue tick, let alone an answer.

In fact, people often don’t even expect a reply, because the purpose of these notes is that they’re purely one-directional. They simply want the words to reach the other person’s heart, make them smile, and make their day.

The composition of the best handwritten thank-you notes

What should a good handwritten note be like? How long should they be? Should they be original, funny, long, on colored paper, put in an envelope, or even a card with a photograph or drawing included? Actually, no exact formula will work in all cases.

However, there are two indispensable factors: sincerity and simplicity. The note gains value when there’s the surprise factor. It can be short or it can be long, but, whatever it is, it’s much better when it’s written by hand. Neither does it matter whether the handwriting is neat or untidy; it just has to be ours and it must come from the heart.

What Happens When You Stop Writing By Hand?
Many adults refuse to give up writing by hand, but the overwhelming presence of smartphones, tablets, and computers means that it happens less and less. Read more »
Link copied!
Interesting Articles
Curiosities
Clever Hans, the Horse that Did Math