Going to Bed Angry or Worried is a Bad Habit

Going to bed angry or worried not only leads to tiredness. In addition, the continued weight of these negative emotions often leaves a dent in your brain and doesn't allow you to think clearly. 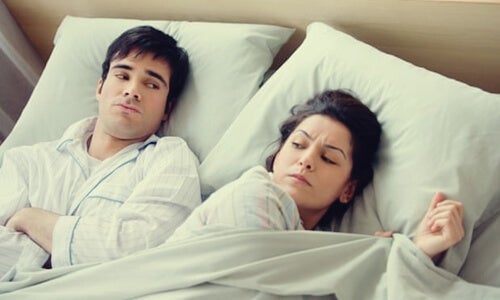 Going to bed angry or worried is a bad habit. Yet, people do it frequently. Most do it almost without thinking. This is because when your emotions are in control, you often just hide your head in your pillow and decide that you’ll think about it tomorrow. Unfortunately, sleeping on it rarely solves a problem, meaning it’ll still be there when you wake up.

Who hasn’t been through this? For instance, you may argue with your partner and, instead of solving your disagreement, you resort to accusations and other unfortunate words. Also, to the kind of silence that leads you to get under the covers and sleep back to back, both wrapped in your childish pride and disagreement. Thus, it’s impossible to get a good night’s rest. You may even not sleep at all!

Not getting a good night’s rest always leads to a rough morning because you’re exhausted and can’t think clearly. Under such a state, it’s very difficult to find the courage and ingenuity to resolve your differences with your significant other. This is because going to bed angry is bad for your health.

Moreover, recent studies indicate that even if you do rest for a few hours, sleeping under the influence of negative emotions does affect your brain. Continue reading to find out more about this.

“I’ll think about it tomorrow.”

Going to bed angry is bad for you

Going to bed angry or worried makes you wake up in a very bad mood. This is because you actually lose a good part of your cognitive potential. In other words, processes such as memory, reflective capacity, and creativity. In fact, the inner calm you need to actively face problems proactively disappears.

Sherlock Holmes said that proper rest is the solution to any problem. However, according to experts, such good advice is only true if you can leave your worries aside. Lying on your pillow with the clear purpose of sleeping is definitely healthy.

Otherwise, if you go to bed stressed, under pressure, anxious, or angry, you’ll only end up intensifying your discomfort. This is mainly because a negative emotional state doesn’t only make it difficult to get a good night’s sleep but it negatively impacts your brain as well.

Your brain and negative emotions at night

Dr. Yunzhe Liu of Beijing Normal University conducted a study in collaboration with University College London on this topic. “I wanted to know the effects of going to bed angry or worried,” she said. She discovered that the one thing that truly affects sleep is the way you manage your emotions and concerns.

Through magnetic resonance imaging, scientists observed that going to sleep angry, anguished, and stressed alters various areas of the brain. It seems to be a cumulative effect, which means you won’t notice it after arguing with your spouse and then going to bed angry at each other and sleeping in isolation. The main changes happen when this behavior becomes a common practice.

The same goes for stress and constant worry. Going to bed with such a negative imprint on a weekly basis alters your brain in several ways:

Don’t take your problems to bed

Has anyone ever advised you to “Never go to bed angry or worried?” However, there are times when problems are quite oppressive and your mind fills with knots you can’t untangle. So, what can you do to keep such tension away from your pillow?

The first thing you can do is keep all that tension and anguish from building up. The problems that arise will resolve soon. And you must confront the disagreements with your significant other or with any other person immediately. Because the things you leave for tomorrow won’t always resolve itself. In fact, they become even more complicated in most cases.

Ideally, allow your body and mind to rest, free of negative emotions. Techniques such as relaxation, meditation, and deep breathing can help you. In addition, you could take a hot bath or enjoy a good book that might lead you to fall asleep.

A peaceful mind sleeps better and also helps you live your life to the fullest, in a healthier way.