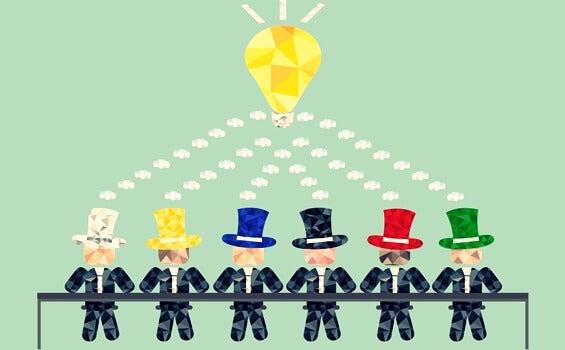 A lot of you have probably heard of it, and if so, it’s probably helped you solve problems more creatively. The six thinking hats technique, developed by Edward de Bono, is a communication and reasoning tool. You use it to see from new perspectives by applying lateral thinking.

Edward de Bono is 84 years old now, but he’s still active. This Maltese psychologist, professor at Oxford University, has given us a priceless legacy in the world of creativity. His legacy has particularly impacted management and leadership.

“Thinking is the ultimate human resource. Yet we can never be satisfied with our most important skill. No matter how good we become, we should always want to be better.”
-Edward de Bono-

The six thinking hats technique is a classic dynamic for encouraging communication in businesses, but it’s also common as an exercise in universities and elementary school classrooms. There, it’s used to teach children how to think better and make decisions as a group.

One thing de Bono emphasizes (also in his other books, like Practical Thinking, Water Logic, and The Use of Lateral Thinking) is that we should all learn to think better. And as part of that “we should,” he also points out an interesting fact. It’s the fact that we actually can learn to think.

Opening yourself up to other viewpoints, learning to be more flexible, reflective, and original in your patterns of reasoning won’t just help you make better decisions. It will also improve the quality of your relationships and make you more productive.

Edward de Bono’s six thinking hats technique always follows the same pattern, the same strategy. But as simple as it might seem at first, is has an incredibly positive impact on our brains. That’s because it’s essentially “training” to learn to think better.

De Bono says that something as simple as putting a hat on your head is often a deliberate act. Your thoughts should follow that rule too: “be deliberate and very careful.” Thinking well so you can live better is a rule worth following. The idea is to use different “hats” to learn a varied, agile, and creative style of thought.

The technique represents the six directions of thought as six imaginary hats. When a problem arises or you try to make a decision, each hat will be a premise, a vision, a specific framework. Once you’ve put them all on, proactively, you’ll feel more ready to make a decision.

Now we’ll take a look at what each hat teaches us.

This hat will show you how to see things from an objective, neutral, and unbiased point of view. The style of thought you’ll apply will be based on analyzing the facts and comparing the information at hand, without making any value judgments.

The black hat represents the logical-negative side and shows you why certain things might go wrong, not work, or not happen the way you thought. The technique of six thinking hats will also help you be critical and see the negative side of things. This will help you be more realistic.

While the black hat gives you the logical-negative focus that’s useful for being more realistic in your daily life, the yellow hat will show you how to apply a logical-positive focus.

The color blue is all-encompassing. It’s always there and it controls everything. It also transmits calm, balance, and self-control. So when it comes to the technique of six thinking hats, this is the one that controls the whole process. You use it two times in this technique: at the beginning and at the end.

Edward de Bono’s six thinking hats technique is a helpful strategy for better decision-making. You can use it to work through different thinking styles in order to evaluate the problems and facts from all possible perspectives. The answers you’ll come to at the end won’t just be more accurate, they’ll also be much more creative and original.

Reversible Thinking: Fighting Cognitive Laziness
There are two options when you firmly believe something but someone gives you proof it's wrong: you can stick to your false belief or use reversible thinking. Read more »
Link copied!
Interesting Articles
Literature and Psychology
What Our Brain Creates When We Read