With a soundtrack and cameo appearance by David Bowie, this film offers a stark depiction of a young woman's downward spiral into drug addiction. 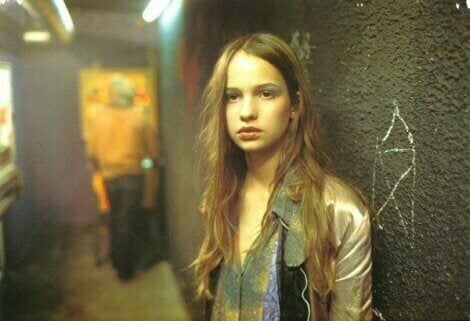 Christiane F. is a film by director Uli Edel. Widely recognized as one of the most successful European films of all time, it broke box office records across the continent. The plot is based on the true story of Christiane Vera Felscherinow, who became a heroin addict and prostitute by age 13.

David Bowie’s cameo was just one of the many aspects that catapulted Christiane F. to cult film status. Most of the film was shot in the Berlin district of Charlottenburg, around the Berlin Bahnhof Zoo (Berlin Zoo Station).

There, you’ll find a subway station, a railway, underpasses, and back alleys. The Bahnhof Zoo was the infamous epicenter of drug and sex trafficking in West Berlin back in the 1970s.

During filming, real-life drug addicts played train station extras in an effort to increase the film’s authenticity. Today, however, the Berlin Zoologischer Garten (the Berlin Zoological Garden) railway station has been remodeled for tourists.

Despite that, German cinema has made sure that this station will always be remembered for the child addicts who lost their innocence there.

The real Christiane F. is Christiane Vera Felscherinow, born May 20, 1962, in Hamburg, Germany. In 1968, her family moved to Berlin. She grew up in a difficult environment, with an alcoholic father who abused her on many occasions, and a mother paralyzed by fear. Her father’s alcoholism later caused her parents to separate. After that, Christiane was raised solely by her mother.

At the age of 12, she first came into contact with so-called hard drugs and became addicted to heroin. At 14 years old, she went to the zoo railway station to work as a prostitute, in order to fund her addiction. In 1984, she was a witness in a pedophilia trial. It was alleged that a man had given heroin to several minors in exchange for sex.

Intrigued by her testimony, journalists Kai Hermann and Horst Rieck from the German magazine Stern followed the trial closely. They wanted to report on the huge drug problem that was crippling Berlin’s youth at the time.

Due to all this, the then 16-year-old Christiane agreed to tell her story. The recorded interviews led to the publication of an autobiography, with the German magazine Stern publishing the first few chapters in advance of the official release, causing book sales to skyrocket.

The novel written by Hermann and Rieck was titled, Wir Kinder vom Bahnhof Zoo (We Children from Zoo Station). In the US, the book was released under the title Christiane F.: Autobiography of a Girl of the Streets and Heroin Addict. The book was translated into 18 different languages and sold five million copies around the world. In Germany, the book even became compulsory reading in schools.

In 1981, director Uli Edel began filming the movie based on the book with the title Christiane F. – Wir Kinder vom Bahnhof Zoo and actress Natja Brunckhorst playing the role of Christiane F. The film was a great success and quickly became a global sensation that sent shockwaves around the world.

The real-life Christiane F. profited hugely from the media attention. She made regular appearances in German tabloids, featuring in articles ranging from the serious to the sensational. Despite managing to get clean for short periods of time, Christiane always relapsed. Today, the real Christiane F. still lives in Berlin, far from the ghosts of Zoo Station. She takes methadone, a heroin substitute, on a daily basis.

The film begins by showing Christiane as a normal young teenager, with minor vices such as playing rock music too loud and staying out late. She lives in an apartment with her mother, where she’s upset by the constant presence of her mother’s new boyfriend.

In an attempt to get out of the house, she goes partying with friends, where they experiment with drugs and marijuana. However, it’s not until the night of a David Bowie concert that she first tries heroin. Although she claims that it’s “purely out of curiosity”, Christiane F. enjoys the effects of the heroin too much. The drug allows her to escape from reality and is the gateway to her new relationship with Detlev, who was already an addict.

The performances of the young cast are nothing short of masterful. This is especially true of actress Natja Brunckhorst, in her first acting role. She gives an incredible performance, taking us on a journey from youthful innocence to brutal physical and moral decay.

The scene in which the two young characters attempt to battle withdrawal by locking themselves in a room in Christiane’s apartment is truly shocking.

Christiane F. and her terrible journey

Christiane F. found her own way through the murky world of Berlin’s subway system and was never owned by a pimp.

The film is merciless in its depiction of West Berlin drug culture. It features some truly shocking scenes, such as one in which a drug addict jumps over a toilet door to pull the needle out of Christiane’s arm and plunge it into his own, stealing her fix. We also see the discovery of dead overdose victims and the sad, pale faces of addicts lining the subway station.

We can’t judge the children or any of the other addicts at the Zoo Station. Life had simply become too much for them. They used drugs as a means of escaping difficult circumstances, instead of reflecting on the causes behind them. Unlike most people, they’ll likely have had no family, medical care, or any reason to keep on fighting.

They sought to numb themselves to the world, a state they could only achieve through the use of heroin. But despite the drugs, they continued to feel and suffer. They’ll always be the children of Berlin Zoo Station, lost souls trapped in a world that few ever managed to escape. Thanks to the stories and testimonies of those like Christiane F., they’ll remain in our collective memory for years to come.

Opioid Addiction and its Effects on the Brain
Opioid addiction is becoming one of the most dangerous health problems of our times. What can be done to solve this problem? Read more »
Link copied!
Interesting Articles
Cinema, Television, and Psychology
Seven of the Best Movies About Depression