Learn all about Norman Bates from the 1960 movie Psycho in this article! 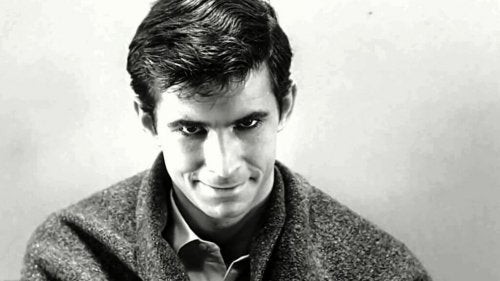 Norman Bates is the protagonist of one of the most iconic and celebrated films in the history of cinema: Psycho (1960), directed by Alfred Hitchcock. Anthony Perkins brought to life this frightening and complex character, who’s become the personification of a psychopath.

Bates’ story is profound, heartbreaking, and chilling. Although Hitchcock’s the best-known version, a novel by Robert Block inspired the film. Thus, Norman Bates’ character is actually based on the murderer Ed Gein.

Going back to when black and white films flooded movie theatres, we delve into a world only a master like Hitchcock could create. Of course, this is a far cry from today’s commercial cinema. In the first half of the 20th century, horror movies provoked fear using our imagination, with suspense and the suggestion of what could happen. Psycho gave us scenes that have since gone down in history as being the quintessential representation of horror movies. It also gave us Norman Bates, a murderer we love. He fascinates us and makes us believe in the magic of movies.

After the success of Psycho, Anthony Perkins’ career took a different turn. He ended up getting typecasted as the Norman Bates character. It seemed like everyone wanted to get in on the film’s success. Perkins played the character again in many sequels.

Psycho marked the beginning and the end of horror cinema. It opened the door to exploring new themes. Its symbolism is so rich that we can apply some concepts from psychoanalysis to the film itself just as if it were a dream or a complex poem. Pyscho masterfully composed Norman Bates’ disturbed mind.

The mother: Symbolism and psychoanalysis

Right when young Marion arrives, Hitchcock left clues as to what was really happening at the Bates Motel. We get the sense that something isn’t quite right, that something strange is going on with Norman Bates. The film is actually a kind of symbolic puzzle that hints at the darkness inside Norman’s mind. This strong symbolism acquires even more meaning if we also consider director Alfred Hitchcock’s past. His films were closely related to the world of psychoanalysis, showing traces of his own childhood traumas.

Like Bates, Hitchcock lost his father at a young age and his mother became a totally controlling woman. He also suffered from an intense fear of birds, an element that’s present throughout the film. This is also in anticipation of the director’s next film: The Birds (1963). The bird’s interpretation has been associated with divinity, fortune telling, and also freedom. We discover that Bates has no freedom. The birds we see in the film are dead or stuffed. Basically, they’ve been stripped of their power and freedom. They’re static and have a negative connotation.

The bird references don’t stop there. Marion’s last name is Crane and she’s from Phoenix. During dinner, Bates talks to Marion about birds, telling her she eats like a bird. Associating Marion with birds is not a casual connection either. The word bird is associated with femininity. Marion is an attractive woman and Norman Bates feels attracted to her.

Norman Bates and the Oedipus complex

Bates suffers from the Oedipus complex. He lacks a paternal figure, which makes the connection with his mother stronger. It even ties his libido to her. We sense that Bates suffered from sexual abuse at the hands of his mother and we see that he has mixed feelings about her. On the one hand, he’s angry at her, but also he can’t seem to break free because he’s obsessively dependent on her. At the same time, when his mother begins a relationship with another man, Norman can’t bear to lose her so he eliminates his rival.

Throughout the film, we see a number of scenes involving mirrors, reflections, water, etc. Water has a sexual connotation to it. In the famous shower scene, despite the fact that a murder was taking place, there is very strong symbolism involving sexual desire. Far from being unpleasant, it makes the scene a desirable one. It’s also raining when Marion and Norman Bates first meet. There’s a sense that something is going to happen.

We can also use the psychoanalysis perspective to interpret Norman Bates’ house, as it has three floors, like the stages established by Freud. The upper floor corresponds to the superego, where we see Bates’ mother’s shadow. On the ground floor, we have the ego, where Bates projects an image of apparent normality towards others. Finally, in the basement, we have the unconscious, the place where Bates and his mother merge. This is where there’s no censorship and also where his mother’s corpse rests.

The house’s design and decoration already warn us of Norman Bates’ personality. It’s like a metaphor. We discover this little by little, and the last thing we see is the basement. This is when Norman appears as his mother and we discover the truth. The film’s climax is when a psychiatrist evaluates Bates and he explains that Norman is no longer Norman, but rather his mother.

As it turns out, Norman became jealous when his mother began a relationship with another man. Norman’s jealousy, along with his fragile mind, led him to become obsessive and totally irrational, killing both his mother and his lover. By not accepting her death, and by not being able to free himself from his mother, Norman stole her corpse and kept it in the house. This violent personality and his desire for “keeping the dead alive” can already be anticipated with Norman’s love for stuffed birds.

The guilt and the lack of acceptance about his mother’s death led Norman to become his mother. His mind started to dissociate until he had two completely defined personalities: Mother and Norman. These personalities came into conflict and, as time passed, his mother’s personality became stronger. At the end, this personality totally dominates Norman.

The sublime final scene is very revealing. A now “disappeared” Norman Bates looks at us defiantly while thinking about his mother. Psycho continues to fascinate and startle us. Bates’ mother’s words keep penetrating our minds. They overwhelm us, making us experience a fear that’s both difficult to explain and difficult to forget.

“A boy’s best friend is his mother.”

11 Psychological Horror Movies
It seems like we all enjoy being afraid, as long as we're in a safe environment. Horror movies are perfect, specifically psychological horror movies. Read more »
Link copied!
Interesting Articles
Cinema, Television, and Psychology
American Beauty - Appearances Can Be Deceiving