Would you like to learn how to get information without actually asking for it? Here are some conversation techniques that may help you. 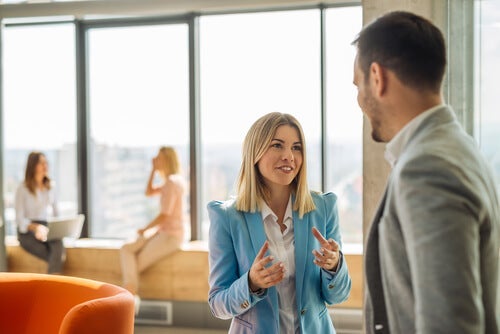 At one end of the scale, we have conversation which doesn’t need to be invasive, and, at the other end, we have interrogation, the most invasive.

However, between these two extremes, there are three other techniques: elicitation, interviewing, and debriefing.

We’re going to focus on elicitation, which isn’t very invasive.

But what’s elicitation? It’s a process that aims to provoke a response or reaction by means of some logical processes. In fact, you could say that elicitation is a form of manipulation or persuasion.

Why does elicitation work?

Thus, the first step in using elicitation is to build a relationship of trust with the person you want to get the information from. Once you’re done, it’s time to start the conversation techniques.

By definition, elicitation isn’t spontaneous. To use it, you need to follow a plan. To begin, you have to meet the person you want to get information from. For example, you need to have a photo of them and get to know their job, age, social and economic status, hobbies, habits, and social circle. Some other relevant information could be the person’s motivations and the most striking characteristics of their personality.

“Quid pro quo – I tell you things, you tell me things. Not about this case, though. About yourself. Quid pro quo. Yes or no, Clarice?”

To carry this out effectively, you also have to know some aspects of psychology. In particular, how memory works. The first and last things we talk about are the things we remember best, as well as the information we managed to relate to what we already knew.

Thus, it’s vital to try to get the information you want from the other person when they’re least likely to remember saying it. This way, the other person is much more likely to forget that they gave that information. Likewise, there’s another very important technique – the most important in fact – that we should use in any conversation. This is called active listening, an often-forgotten ability.

This technique consists of making statements that provoke a reaction. You have to put them on the line so that they’re forced to decide. This way, they’ll reveal their feelings or opinions. For example, imagine that you want to know how the negotiations between two parties are going:

“The relations between the two political parties are strained. They seem to be far from reaching an agreement.”

“No, quite the opposite. The negotiations are on the right track; they’re close to signing an agreement.”

This technique is based on the human tendency of need. When we receive something from another person, we feel obliged to give them something in return. The following example is about a co-worker’s complaints:

“At work, I feel underestimated. I guess it’ll pass, but I’m not happy about it.”

“I know what you mean. The other day, the boss threw my work in the trash right in front of my eyes.”

This technique is used to elicit more specific details. By calling something into question, the other person will give you more information about it so that you’ll believe them. This example shows how you get more details about a project:

“I’m about to finish the class project.”

“I don’t believe you. I’m still doing the introduction and there’s still lots of time to spare.”

“Yesterday, I finished writing the conclusions.”

“Then you can’t have done very much.”

“I wrote three different sections. I started with…”

This technique is actually additional – something you can add to other techniques to make the information more successful. In the following example, a student flatters their teacher in order to find out how to do an exercise:

“Teacher, you always explain things so well. The trouble is that I have a hard time understanding the exercises. If you would be so kind as to explain them to me again.”

In case you haven’t noticed, in all these examples, the information has been obtained without asking a single question. That’s the basis of these conversation techniques: to get information without asking for it. However, even though it may seem simple, it does require a lot of practice. It isn’t easy to introduce these techniques into a conversation, and so it’s best to plan ahead and train yourself.

“Flattery and insults raise the same question: What do you want?”

Assertive Communication with Your Family
Communication is the basis for a good relationship with your family. But how can we get them to listen to us? It seems difficult, right? Read more »
Link copied!
Interesting Articles
Social Psychology
Blue Eyes and Brown Eyes: The Jane Elliott Experiment