Bacteria have been discovered in the brain, but there is no explanation of how they got there, nor is it known if they’re beneficial or harmful. It's even suspected that they can influence mood and personality. 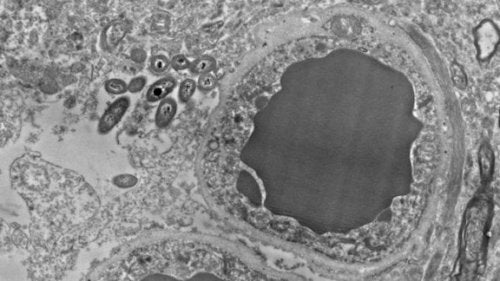 During the last annual meeting of the Society for Neuroscience at the University of Alabama at Birmingham, researchers presented a report that showed how some gut bacteria lives in different regions of the brain, which seems to be the brain microbiome.

This discovery is both fascinating and intimidating. There’s still no explanation as to how the bacteria reached the brain, or whether they’re beneficial or harmful. Experts even believe that they can influence mood and perhaps personality.

What is the gut microbiome?

The gut microbiome is the set of microorganisms that live in your intestines. There are approximately one hundred trillion different species of bacteria. In turn, these are made up of more than three million genes. Out of all of them, human beings only share one-third. The rest are exclusive to each person. Thus, the gut microbiome is an important part of each person’s identity.

Some of its most important functions are immune system regulation, nutrient absorption, and the control of external pathogens. Any alteration in the gut microbiota can cause autoimmune diseases, allergies, or infections. In fact, scientists have also linked it to Alzheimer’s and Parkinson’s.

On the other hand, imbalances in this gut flora generate endotoxins, high oxidation levels, and the accumulation of abdominal fat. In addition, chronic inflammation causes cardiovascular problems and diabetes.

Although there’s a widespread fear of microbes and bacteria, the truth is that you can’t live without them. Despite being unaware of it, you have billions of living beings coexisting inside your body.

Scientists have started asking themselves how these bacteria get to the brain, since it’s protected by the blood-brain barrier.

The blood-brain barrier is a protective system against the entry of foreign substances. It allows the passage of water, soluble molecules in lipids, and some gases. It also allows the selective passage of amino acids and other molecules. But the bacteria found in the brain are, for the most part, from the gut.

They’re glial cells that support neurons and astrocytes and prevent the entry of neurotoxins and other substances in the brain. These harmful substances, when they manage to penetrate the barrier in some way, often produce inflammations with very negative and even deadly consequences. But the funny thing is that astrocytes seem to be the favorite place for these gut bacteria to live in the brain.

Researchers have stated that the bacteria could go through the intestinal nerves, the blood-brain barrier, or the nose. However, the real cause is still unknown. There’s still a lot to investigate about this possible brain microbiome.

Dr. Rosalinda Roberts and her team from the Psychiatry and Behavioral Neurobiology department at the University of Alabama at Birmingham are responsible for this finding. They studied the brains of 34 people. Half of them were healthy subjects and the other half suffered from schizophrenia. Furthermore, they carried out a parallel study with mice, to rule out that the bacteria appeared only post-mortem or if there could be any error due to contamination.

In both studies, scientists observed the presences of bacteria in human and mice brains in non-infectious or traumatic situations. In fact, they found them in several areas of the brain. Mainly in the substantia nigra, the hippocampus, and the prefrontal cortex, and very little in the striate. In addition, none of the brains they examined showed inflammation.

These results have left the door open to speculation and new research on the brain microbiome. For now, the possibility that these microbes are related to behavior, mood, and some neurological diseases is being considered.

The Enteric Nervous System: The Second Brain
The enteric nervous system is often considered our 'second brain'. Read all about this amazing nervous system in our article! Read more »
Link copied!
Interesting Articles
Behavioural Biology
The Neurobiology of Alcoholism

Eugène Delacroix was a leading painter of the French Romantic period of the 19th century. Inspired by history, literature, and…