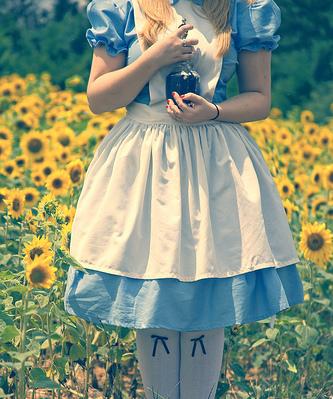 Alice in Wonderland Syndrome is a neurological disorder that usually occurs in children, generally at night. It is described as a set of symptoms where the visual perception and body image are altered, incorrectly perceiving the size of one’s different body parts and external objects, which causes disorientation and distortion of the senses.

Usually this syndrome is diagnosed during childhood, when the child can feel like a character in the story Alice in Wonderland. They can feel a bit lost within their dreams. Most people stop feeling these symptoms in adolescence, although some experience them throughout their whole lives, especially at the onset of sleep.

What causes this syndrome?

Alice in Wonderland syndrome can be caused by an abnormal amount of electricity running through the body, which causes a change in the blood flow within the brain. Thus, the signals sent from the brain to the eyes are altered, giving way to hallucinations, disorientation and an altered self-image.

It can also be caused by epileptic seizures in the temporal lobe, causing feelings of euphoria, intense fear or paranoia.

It can also be triggered by headaches, migraines, brain tumors and Epstein-Barr virus, where the symptoms can be seen even in the early stages.

Signs and symptoms of Alice in Wonderland syndrome

The main symptom of Alice in Wonderland syndrome is an altered self-image in which the affected person sees parts of their body in different and inadequate sizes. The person sees their head and hands as disproportionate to the rest of their body.

Another significant symptom is that the patient perceives the size of other objects incorrectly.

The individual loses all sense of time, as it can seem to pass too slowly or much too fast.

Some people can experience intense hallucinations. They can visualize things that aren’t truly around them and can also experience the wrong impressions of certain situations.

They suffer from alterations in their visual perception, but also in their auditory and tactile perceptions.

This syndrome has a tried and effective treatment when it is caused by migraines, although chronic cases have little to no treatment. Manifestations of the symptoms are not harmful or dangerous, and probably fade over a period of time, with rest being the most optimal treatment.

Like the extraordinary human beings that we are, we crave success. We're made to achieve it and to be capable…

"I lost my father when I was 8, almost 9, years old. I haven't forgotten his deep and loving voice.…

High performance isn’t limited to athletes or great businessmen. We can all aspire to be the best at what we…