Alberto Belluci: The Man Who Survived Coronavirus at 101

Alberto Belluci escaped the Nazis three times during World War II. This Italian will soon be 102 years old and just beat the coronavirus. This is a story full of hope for these difficult times. 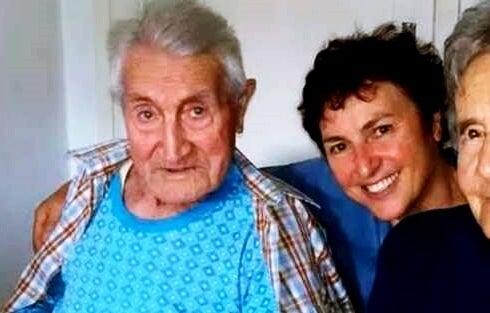 His name is Alberto Belluci and he survived the Spanish flu between 1918 and 1920. This proud Italian is making headlines around the world. The 101-year-old man who beat the coronavirus is, as of today, the second-oldest person to beat the disease. In fact, he’ll be 102 years old in April.

In the midst of such a dark backdrop in which the numbers of infected and dead continue to take our breath away, these stories are enlightening. Moreover, Mr. Belluci’s case isn’t the only one.

Zhang Guangfen is another survivor of the current pandemic. She was a patient in Wuhan, the epicenter of the outbreak. At 103 years of age, she was discharged after spending six days in intensive care.

COVID-19, as we know, is especially virulent in the elderly population. However, we’re hearing of more and more exceptions every day. Many families are going to health centers to pick up their elderly parents and brave grandparents. They live to tell their story of having survived wars and now the effects of a pandemic that nobody expected.

What do these cases explain? Why did these patients of such advanced age beat the virus? Perhaps it’s fate or an exceptional immune system. Maybe it’s luck, or maybe this unknown virus chooses to show mercy to some and not others. We don’t know. Whatever the case may be, these stories are full of encouragement and hope.

Alberto Belluci, the man who beat coronavirus at 101

The coronavirus figures in Italy are devastating. As we write this, there’s a total of more than 90,000 infected and 12,000 dead. However, the trend finally seems to be turning downwards. This is a small glimpse of hope to hold on to, especially in the Lombardy area, which has been the most affected by COVID-19.

However, beyond the health aspects, we have other areas to worry about. There’s great suffering at a social level, and resources are scarce, even for some people to buy something as basic as food.

One of the most beautiful countries in the world continues to live in anguish and uncertainty. Perhaps that’s why the story of this 101-year-old man who beat the coronavirus is undoubtedly one of the most widely shared during these days.

Newspapers such as Corriere della Sera echoed this news, which was soon shared halfway around the world. Thus, even though it’s true that there are many cases of elderly people who beat the coronavirus, it seems that Alberto Belluci’s personal story is special.

The hero of Rimini

When we read the headline that a 101-year-old man beat the coronavirus, it isn’t hard to imagine what his eyes may have already witnessed. We know that, as a child, he experienced the end of World War I and World War II in adulthood. Alberto Belluci is from Rimini, a city on the Adriatic coast, in northern Italy, which has the been most severely affected by the coronavirus.

When he fell ill and began to suffer breathing problems, Elisa, his granddaughter, had to call for health services to come pick her grandfather up. Just before she let him go, and perhaps with the distressing thought that this may be the last time she would see him, she spoke some almost prophetic words: “This virus is nothing compared to the Germans you faced. You have to come back, Grandpa”.

And Alberto Belluci did exactly that. He went back to his people. Even now, in the interviews he gives to the media in his country, he emphasizes the message that, for him, the coronavirus was nothing compared to everything he experienced in the past. Born in the midst of the Spanish flu pandemic, he survived World War II and escaped from the Nazis on as many as three occasions.

How could he not return home to his family? No one could stop him!

The future isn’t written for anyone; we can all survive

The headline that a 101-year-old man beat the coronavirus is both pleasing and exciting for two main reasons. The first is that it comes to us from Italy, a country which, along with Spain, is one of the most affected by the coronavirus these days. And, secondly, because Alberto himself stresses that the future isn’t written for anyone.

The mayoress of Rimini describes him as a hero, someone who, at his age, shows that miracles do exist. However, Alberto Belluci stressed one fact: he was very afraid indeed. All around him people were dying in complete loneliness, without the affection of their loved ones.

While he was witnessing that drama, he only had one thing in mind, one that he repeats to journalists when they interview him: “A casa mi aspettavano” (They’re waiting for me at home). Now he just wants to rest, eat hot meals, and enjoy the hugs of his family.