The Boy Who Showed Us That Reading Is Medicine 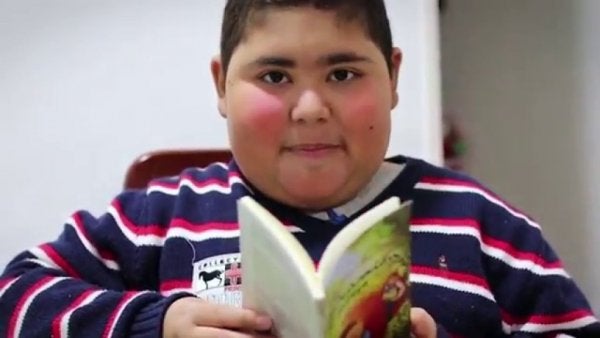 This article aims to be a small tribute to Rubén Darío Ávalos, a Paraguayan boy who died at the age of 12 in Seville of a strange condition called histiocytosis. This little angel wrote stories and read the writings of Plato to try and forget his illness. In fact, Rubén’s existence was a miracle who was always on the lips of the health professionals and volunteers of the Spanish Association Against Cancer , who support children and their families in children’s oncology wards. His whole life is a testimony to the fact that reading is medicine.

Rubén published four books of stories and a historical novel. They were Encounters with Rubén (2015), Sensation of Purity (2015), The letters and other unpredictable stories (2016), The master medicine (2016) and The Tiara (2017). As Rubén Darío Ávalos lacked bodily defenses, he found his refuge in books.

Now that Rubén has died, I think that those who should get to know his amazing story shouldn’t only be other children like him, but also young people and adults who are going through a similar experience. Rubén fought against all adversities, thanks to his reading of books, the solace of writing, and his enthusiasm to learn.

“The measure of what we are is what we do with what we have.”

During an interview in 2015, Rubén talked about how reading had saved him. In that interview, he explained how reading and writing were a refuge for him to cope with his illness. Due to his illness’s late detection, it became chronic, and he needed to have chemotherapy for life.

Rubén believed reading is medicine. The books he loved most were “One hundred years of solitude“, “Platero and I“, “The family of Pascual Duarte“, “The President“, “The metamorphosis“, “Treasure Island“, “Son of man“, “Fictions“,” Around the world in 80 days” and “The war of the worlds“. Due to such variety in his reading, his own novels and stories don’t have any specific style. Each story he invented is completely different.

He liked reading so much because he was able to immerse himself in other worlds. In those worlds he would travel to other places and times, get to know other people and make new friends. This precocious writer compiled stories that he had written at different ages, from 2 years old to 12. He didn’t need to grow up to be great. His legacy of words and strength will remain in his books.

To create his characters, Rubén found inspiration in the people that he met. He met them in his dreams, in books he had read, or just simply in his imagination. He always tried to give them a very well-defined personality and to make their lives a message. Generally, he presented both their virtues and their defects. He showed how these defects, if we work on them, can also become part of our box of virtues. He fed brave people’s self-esteem and gave them determination to live in this way.

The historical novel he wrote was all about animal abuse and bullying. His favorite work is “The Best Medicine of All”. He believed that reading is a medicine for the soul, hence the name of the book. The stories in this book were written at different ages (2, 4, 6, 8, 10 years and beyond) and so each idea came up in a different way.

He used the publication of these short story books to pay for part of his stay in Seville, where he received treatment. His philosophy of life was that we should always see the positive side of things. No matter how bad the situation is, our mission is to find that positive side and be grateful for it. Remember, reading is medicine.

“We relish news of our heroes, forgetting that we are extraordinary to somebody”

Helping Cancer Patients: “The Heroes of our Time”
A cancer diagnosis can be so overwhelming. What can we do to be helping cancer patients? Read more »
Link copied!
Interesting Articles
Clinical Psychology
Women and Depression: Risk Factors