The Bizarre Days of the Black Death

The Black Death decimated between 30 to 60 percent of the European population in the Middle Ages. It was an unprecedented epidemic that still terrifies a lot of people today. 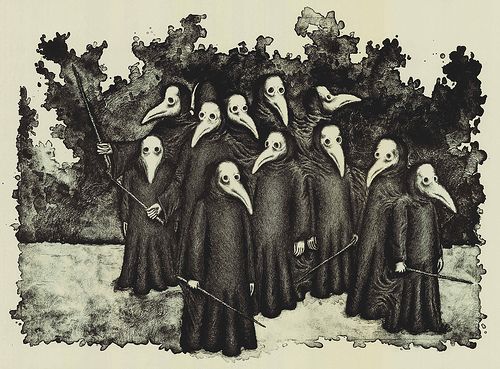 One day, a contaminated cargo arrived in a port city of 100.000 inhabitants and of big commercial importance. In less than a month, 300 people were dying each day from this pandemic. By the end of it, 10% of the townsfolk had died. This is known as the Black Death.

The exact cause of the plague it’s still unknown. Men, women, children, old people, farmers and artisans, priests, and knights perished due to it. There was no possible escape.

You’re not reading a story about zombies. In Valencia, in 1348, the Crown of Aragon called it the Black Death. Put yourself into their shoes, and try to understand their actions, think about what they were thinking, and why they did the things they did. In this article, you’ll learn how bad the Black Death was, its development, and its repercussions.

Mid-fourteenth century, the Black Death came upon Europe and became one of the worst demographical catastrophes in history. Most of the inhabitants of the Old World new about it, they had been living with it for a few centuries now, and they’ll have to live with it for a few centuries more. However, it hadn’t been as bad since the times of Justinian I, in the 6th Century. The Black Death frightened people even more than leprosy.

Historians are certain of how the Black Death arrived into Europe: through Caffa, in Crimea. The Mongol army besieged the city and was attacking it with something worse than their swords. Mongols themselves said that they were throwing infected dead bodies across the city walls.

Actually, you don’t need to pin the Black Death to the Mongols alone. No city walls can keep rats or fleas away. After this alert, Genoese traders ran back to Italy, but it was too late. The Mediterranean Sea was now a bridge for the disease, and in a year the West was doomed.

All the roads led to the Black Death

For a time, people thought the Black Death spread through the air. The smells from the rotten corpses, and Greek medicine and astrological superstitions, all pointed to that direction. Rats and fleas were the probable cause of how fast it spread. Even two weeks after the infection, there were no symptoms. Five days later, death was imminent.

In every port or infected city, there was a new outbreak. People running from the cities brought the Plague to the countryside, where the disease’s demographic became even worse. The main trade routes and pilgrimage roads were filled with Black Death.

In the face of death

Nowadays, historians believe it was the bubonic plague, but other epidemics, such as Ebola or pulmonary anthrax, aren’t completely ruled out. The symptoms must have been awful. From its namesake black spots, cough, delusions, inflammation, these were warning signs of impending death. Beside animal or airborne contagion, blood was really dangerous too. Doctors couldn’t tend to the disease.

This demographic crisis had consequences such as famine, orphanhood, or loss of crops. Also, it’s very difficult to separate the direct deaths of Black Death from the deaths not linked to this disease.

What happened after the Black Death?

Human losses in France, England, Italy, or Spain were as high as 50% or 60% or their population, with even higher numbers in specific regions. Alfonso XI of Castille was among the victims, just as he besieged Gibraltar. It even led to a truce in the Hundred Years’ War.

After the Black Death, there was still chaos. As usual for the time, Jews were used as scapegoats. They were accused of poisoning people; mobs would also attack them. In a decadent society, conventionalisms were useless. In the time of the Black Death, there was more prostitution, among other vices, maybe a desperate form of carpe diem. Searching for forgiveness became the norm, people wanted to be rid of sins before their imminent death.

Curiously enough, a curious economic consequence was the release of plenty of lands. Many of the surviving farmers had access to these lands. In a society in the brink of death, other people’s death was a gift for the living. Although, after the Black Death, society welcomed the Renaissance era.

Rare Diseases: The Invisible Pain of Millions of People
Rare diseases are the invisible face of human suffering , suffering that they reap lives and which, however, are usually unknown to both society and Read more »
Link copied!
Interesting Articles
Culture
Why Is The Word "Nankurunaisa" The Key To Everything?