Tennis Psychology and How to Win the Mental Battle

Tennis is a sport that, due to its very specific characteristics, requires great mental ability. We'll be looking at tennis psychology in this fascinating article. 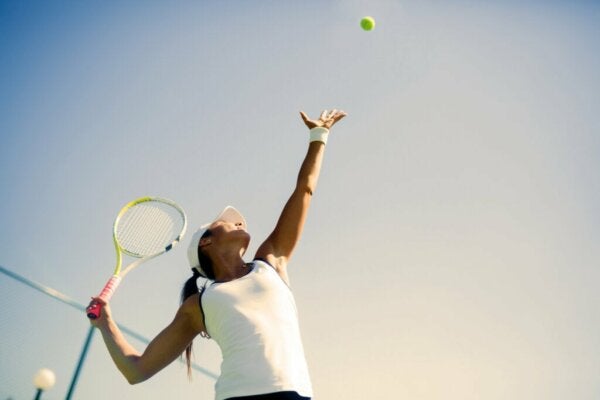 These professional strategies show the association between a person’s level of self-efficacy and their sports performance (Ortega and Meseguer, 2009). Psychological skills in tennis, in many cases, make the difference between a good player and a great player.

Lucia Jiménez Almendros is a tennis player who’s now a sports psychologist. She has a Ph.D. with a thesis entitled Positive Cognition and Emotion in the Coping Strategies of Competitive Athletes. She has come to the conclusion that it’s often only the human mind that imposes limits in sport.

Several elite tennis players (ATP and WTA) have confirmed that, in professional competition, when technical, tactical, and physical aspects are similar, the final result is determined in 95% of cases by mental and psychological factors (Hoya Ortega, 2018).

In high-level sports, winning comes first and, in some cases, it’s practically the only thing that matters. Here, we can’t apply the mantra that “taking part is the most important thing”, which we apply in basic levels of sport.

When everything is governed by results, ranking, and pressure, then psychological skills take on great importance. It’s here where we realize that, to become a top-level sportsperson, you unavoidably have to strengthen your mental abilities.

Tennis psychology has a great influence on the physiological, technical, and even tactical aspects of the game. Players who value themselves more and perceive themselves as more physically competent are more motivated by competitiveness and also by success and achievement.

These skills are essential in order to obtain optimal performance in high-intensity sports, such as tennis. Players have to perceive and interpret information extremely quickly. By doing so, they give themselves enough time to plan, initiate, and execute a successful stroke.

Tennis is characterized by high psychological demands, and it’s rather unique in how it requires great mental complexities. It’s an individual sport, there’s no time limit, and that can cause a loss of concentration, motivation, and activation.

Athletes have to make many decisions.  There are no long breaks, and there are many critical situations that can produce ups and downs in performance (Hoya Ortega, 2018).

“It’s always in my mind still that I can crush anybody. That’s not an issue. But I think that is the same for most athletes. If you don’t believe you can win tournaments anymore, then you can’t do it.”

How to win the mental battle

Tennis psychology is related to skills that are intrinsically motivational. Skills that will help the player win the mental battle. This motivation is, on one hand, towards success (they don’t think about losing, they’re realistic and optimistic, and they attribute their successes and failures to internal aspects). On the other hand, it’s also directed towards their performance (playing well, improving, and giving their all).

These qualities and goal-oriented behaviors are key to winning the mental battle.

Elite tennis players get nervous too, but they have a greater ability to control this anxiety. They work on their ability to concentrate and focus on the important aspects of the game. They aren’t easily distracted. However, if they are, they use it to harm their opponent, as they easily change the different types of concentrations they use.

In order to maintain their mental concentration during matches, they follow some predetermined performance guidelines, both before and during games. By doing so, they make everything seem more normal and can, therefore, achieve maximum performance.

In short, in order to win the mental battle, besides playing good tennis, tennis players also need to have the feeling that everything is going smoothly, almost automatically. They don’t want to think too much about what they’re going to do. They also want to feel that everything’s under control.

Believe in Yourself: The Power of Self-Confidence
When nobody believes in you, you must believe in yourself. The opposite of courage is not fear or cowardice, it's conformity. Read more »

I want to play a game. A game that involves shouting, but not pain. A game that uses toys, but not for torture. Remember, this is a game where both…

Controlling compulsive buying is very challenging for some people. Those who like to shop sometimes find it difficult to control their…

Culture
I Will Live Until I Die

As you read the quote below, consider these questions: What do these words suggest to you? Utopia? Idealism? Impossible to put into practice? Think about how they might apply to your…