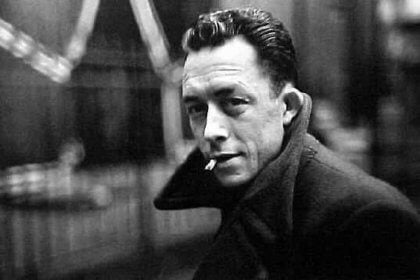 Most of Albert Camus’ quotes reveal his rebellious spirit. This French man who was born in 1913 was one of the most remarkable novelists, journalists, and philosophers of the 20th century.

He lost his father in the war before his first birthday. He grew up in poverty and was only able to study thanks to a scholarship they gave to children of dead veterans. Despite his difficult upbringing, he won the Nobel Prize in Literature on his 44th birthday.

He was deeply influenced by Arthur Schopenhauer and Friedrich Nietzsche. However, Camus defined himself as an anarchist. His work was centered on the absurdity of existence.

“The absurd is the essential concept and the first truth.”

Loving and being loved

This is one of Albert Camus’ most famous quotes of all time: “Whoever gives nothing, has nothing. The greatest misfortune is not to be unloved, but not to love”.

In this quote, he states that love is an active quality. Camus was a fan of freedom and autonomy. Therefore, what he believed about love isn’t surprising at all. He always emphasized the importance of being a subject rather than an object of sentiment.

Walking next to each other

This quote talks about friendship. It also reflects his rejection of hierarchies. Albert Camus was an independent leftist who always condemned different forms of power.

Camus didn’t talk a lot about success because he considered it somewhat ‘absurd’. He basically believed that existence itself was a failure due to its lack of meaning. Here, we’ll show you one of his quotes on success:

“Success is easy to obtain, what is difficult is to deserve it.”

In this quote, he goes against the usual concept of success as a great victory and rather sees it as an ethical, deserving thing.

In the heart of winter

Albert Camus had a rough childhood, mainly due to the poverty in which he lived. However, thanks to his professor Louis Germain, he was able to discover the wonderful world of literature. He felt so grateful for this that he dedicated part of his speech to Germain when he accepted his Nobel Prize.

This next quote talks about that willingness to resist and overcome adversity. It goes like this:

“In the depths of winter, I finally learned that within me there lay an invincible summer.”

A lot of Albert Camus’ quotes are ironic and funny. Does this make them any less intellectual and deep? Absolutely not. However, they do show that he was a genius who under no circumstances lost his humility. His quote that best describes this is:

“Nobody realizes that some people expend tremendous energy merely to be normal.”

Albert Camus and the real meaning of life

As we mentioned above, Albert Camus often wrote about the absurdity of existence. He didn’t quite understand the way some people chose to live their lives. He felt like everyone was desperate to find their real purpose in life, without realizing that their life was slipping out of their hands while they were doing so.

This next quote expresses a very true paradox:

“You will never be happy if you continue to search for what happiness consists of. You will never live if you are looking for the meaning of life.”

Due to his upbringing, Camus had to grow up quickly. This is something that has plenty of downsides, but that also has advantages. He realized that everything he’d experienced in his life made him who he was in the present moment.

“There is no sun without shadow, and it is essential to know the night.”

In this quote, he expressed that difficult times lead to personal growth.

Albert Camus expressed human reality in a way that people will forever admire. His work is elegant, creative, raw, and will never go out of style.

Alexander Luria’s 6 Best Quotes
Alexander Luria is considered the father of modern neuropsychology. In this article, we'll explore his main contributions through his best quotes. Read more »
Link copied!
Interesting Articles
Philosophy and Psychology
Sartrean Existentialism: Who We Really Are

Restless legs syndrome is currently one of the most common neurological disorders. It is a very uncomfortable tingling and itching sensation…

Culture
Curiosities of Freud’s Theory of the Unconscious Mind

Freud's psychoanalytical theory has received strong rejections and produced debates around the validity of its methodology, but nobody can criticize…

Culture
Circular Economy - What Is It?

The paradigm of the current economic model of production and management of resources, goods, and services based on “produce, use,…