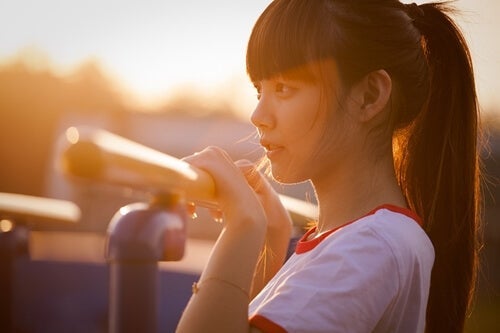 Scientists have suspected for some time that girls’ brains mature faster than boys’ brains. Now, a study from Newcastle University in the United Kingdom finally has the data to back up their hypothesis. In addition, researchers have shown that girls’ neurological development can begin up to ten years earlier than in boys. Nevertheless, it’s important to keep in mind that the individual differences are significant, and can’t be explained solely as a function of sex.

We should clarify that girls’ earlier neurological development doesn’t mean that they have higher intellectual potential. What it means is that, between the ages of 10 and 12, girls have greater cerebral organization and neurologic activity. Boys, on the other hand, start this same maturation process between the ages of 15 and 21.

In other words, both sexes go through the same maturation process. At the end of this process, their brains are ready to interact with their surroundings and they’re better able to reflect, pay attention, and be less impulsive, among other things. However, girls start this process before boys.

It’s also important to mention something that neuroscientists are concerned about, which is the effect that our modern surroundings have on children’s brain development.

A sedentary lifestyle, social disconnection, a preference for digital stimuli, and external pressure to perform takes time away from play. All of those factors can lead to delayed brain development.

Why do girls’ brains mature faster than boys’ brains?

The scientists at Newcastle University that we mentioned above conducted a study in 2013 that brought unexpected results. The goal of the study, according to psychology professor Marcus Kaiser, was to understand the level of connectivity in the human brain between ages 4 and 40.

As they conducted their tests and MRIs, they realized something very significant. Girls between 10 and 12 years old had more mature brains than boys of the same age.

You’re probably wondering what we mean when we use the word “mature”. This means that the brain has already begun the process of pruning the synaptic connections that are no longer necessary in order to reorganize the brain more efficiently.

Let’s take a closer look at the data.

If you were to say that a strong, skilled brain with good potential is a brain with an appropriate level of synapses, you might confuse a lot of people.

That’s because we tend to think that the more neural synapses you have, the better your brain will work. However, that’s not the case. In fact, scientists believe that one of the main problems for people with autism is their hyperconnectivity.

The fact that girls’ brains mature faster than boys’ brains doesn’t mean that we should raise them differently. In fact, something that experts advocate for is the need to address children’s educational, emotional, and personal conditions so that they can achieve effective neural connectivity.

What do we mean by that? Well, for example, a child’s brain isn’t made for sitting around all day. Children need to move, explore, discover, play, interact with others and experience new sensations, emotions, and feelings.

Although girls’ and boys’ brains mature at different times, it’s important to create the best possible conditions for optimal brain development, regardless of sex. To that end, it can be helpful to remember the best ways to help them do that.

What do children need for optimal brain development?

Proper brain development requires emotional support. Children need healthy attachments. A safe, loving, and affectionate family environment is essential. In that context, the people around them can help them manage and understand their emotions.

Physical activity is also essential. Their days should be filled with movement, play, and hands-on activities.

Social interaction is another key element for healthy brain development. They should have plenty of time to play and spend time with other children and adults.

Remember that factors such as stress and anxiety have serious negative repercussions for brain development at an early age. Help children avoid them as much as possible.

Lastly, don’t forget about the cornerstone of child-rearing, which is to encourage their curiosity and creativity. It’s very important to foster their ability to invent, create, experiment, make mistakes, get things right, try new things, feel, and discover the world at their own pace.

Although each child’s brain develops at its own pace, we have the opportunity and the responsibility to optimize the process.

Boredom in Children – A Powerful Learning Tool
Today's article is about the power of boredom in children. For starters, you must understand that the human brain is designed for seeking stimulation. Read more »
Link copied!
Interesting Articles
Brain
Why Does the Brain Age? The Answer is in Your Genes

The nervous system is sort of like an orchestra conductor. Its various parts interact with one another and are responsible…