Pablo Picasso is one of the most influential figures of the 20th century, not only in terms of art but also in wisdom. 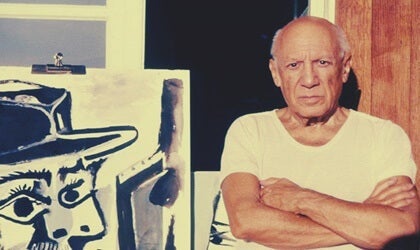 Many quotes by Pablo Picasso are a true breath of fresh air. No doubt the talent of this wonderful painter isn’t only reflected in his painting, but also in those impressive aphorisms that still surprise us today.

One of the most interesting characteristics of Pablo Picasso’s quotes is that many of them remind us that art and life are two expressions of the same things. He was a great artist who taught us to look at everything beyond our fields of vision.

Picasso was loved and hated. Admired and vilified. No one, however, could question his talent or commitment to democratic causes and creativity as the maximum human expression. Here are seven of the greatest quotes by Pablo Picasso.

“Art is the lie that enables us to realize the truth.”

The wisdom of Pablo Picasso

The quotes of Pablo Picasso often contain a certain paradox, as we can appreciate in the following: “I’m always doing that which I can’t do, in order that I may learn how to do it“. This quote is a rather ingenious way to talk about the essence of learning.

It’s true that you make progress when you get better at doing what you already know how to do. But the real evolution lies in facing what you can’t easily attain. That which isn’t yet under your control and promises to transform you when you finally master it.

Creativity and creation play a fundamental role in the quotes of Pablo Picasso. After all, he was an artist and imagination, his ability to get a new reality out of nowhere, was his main working tool.

Picasso gives us a clue to understanding that process: “Every act of creation is first an act of destruction“. What it means is that before you can make new things, you must first dispose of the old. The mere act of doing something leads to a new reality.

Contrary to what many believe, Picasso wasn’t an enemy of rules, even when it came to painting. He went beyond it. What this great artist was, in fact, looking for were ways to transcend all those parameters, not ignore them.

In this regard, one of the quotes by Pablo Picasso says: “Learn the rules like a pro, so you can break them like an artist”. This is a beautiful statement that synthesizes the process of true creativity.

4. Is common sense an obstacle?

Picasso said: “The chief enemy of creativity is good sense”. This one refers to the kind of common sense based on obvious logic. In what you might call an “indisputable” norm of the reason.

However, creativity arises precisely when you break with the basic logic and move towards a more complex logic. If you stay at the elementary level of your logic, good or common sense, you’ll hardly be able to discover a new path.

This is one of Pablo Picasso’s most cited quotes: “Inspiration exists, but it has to find you working”. With this statement, he ditches the old argument about whether muses exist or not, whether any artistic work is purely based on inspiration or not.

Finally, Picasso warns us about a kind of epiphany. That’s a revelation that gives rise to creativity. But the only way in which this imaginative force emerges is through hard and constant work.

It’s clear that total creativity doesn’t exist. In other words, no one can create something that’s completely detached from what others previously or simultaneously did. Thus, absolute originality is impossible.

Hence, Picasso said: “Good artists copy; great artists steal”. It may seem contradictory, but it isn’t. Copying is equivalent to mere imitation while stealing, as per the context in which Picasso places it, is appropriate. That is, to put your personal touch on the work of another so it no longer belongs to its original creator.

7. Pablo Picasso on children and adults

The artist refers to the conquest of maturity and autonomy that oftentimes takes half of our lives. However, you must use this achievement for a new purpose: to recover your inner child. This is because childhood might just be the best paradigm when it comes to creativity without awareness. Furthermore, an adult who becomes a child again is aware of what they can create.

To conclude, Pablo Picasso is one of the teachers who never stopped learning. His work configures through his paintings and his way of thinking. He opened horizons, inspired, and motivated. He pushed us to see how the world is much more than what it seems to be. More than what we encounter every day and that, at the end of the day, is completely meaningless.

9 Extraordinary Phrases from Jacques Lacan
Jacques Lacan is one of the most famous and most enigmatic thinkers of our time. Here are 9 of his most extraordinary quotes to ponder. Read more »

We all know Albert Einstein, the best-known scientist of the twentieth century. His great contribution was the theory of relativity,…