Moral disengagement is the difficulty assuming responsibility for one's actions when they contradict a value or a norm. Many seek means to minimize or hide an ethical transgression when they incur in one. 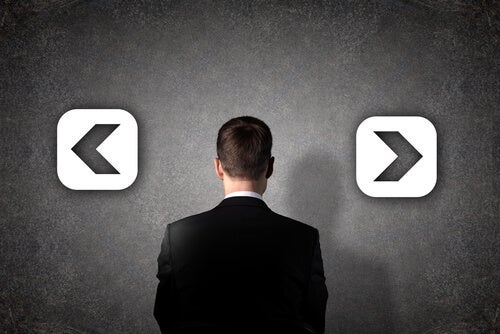 Moral disengagement is an interesting concept that points to a theory proposed by Albert Bandura. It’s related to the reasons why many people end up engaging in behaviors that contradict their values. Those who, for example, speak of respect and offense or of peace and aggression.

This moral disassociation was evident in many historical phenomena. The Nazi Holocaust is the most publicized. It makes you wonder how the entire country complicity agreed to a massacre. How could it be that men and women, some of them highly decent and enlightened, lent themselves to bring the world to an extreme and devastating situation?

However, moral disengagement isn’t a macro phenomenon only. You can see it on a daily basis. For example, people who are supposedly against corruption but are masters at bribing. Also, some who defend the rights of the most vulnerable but exploit their employees. What’s striking about all this isn’t the behavior itself but the fact that it doesn’t generate any kind of discomfort for those who incur such contradictions. This is precisely what this theory is about.

Several theories try to describe how human beings acquire the principles and ethical values ​​that govern them. For Albert Bandura, it’s a process by which these values ​​are instilled. In other words, through stimuli such as rewards and punishments. People internalize rules due to this.

According to his theory, some circumstances lead to flexibility in the observance of said rules. It may be due to social pressure, because it’s an inconvenience at certain times, or perhaps because there’s an urgency, among others. The truth is that human beings are capable of acting against the norms instilled in them since they were children.

When a person betrays their moral convictions, great discomfort occurs inside them. It’s a mix of remorse, guilt, and dismay. In this state, the affected person needs to resolve their discomfort. They can do so by rectifying or using mechanisms to justify what they did. Moral disassociation is one of them. It allows you to reinterpret your behavior so you don’t feel bad about it.

According to Albert Bandura’s theory, there are seven mechanisms or ways to justify or give a convincing explanation about the reasons why a person betrays the values ​​they claim to believe in:

Finally, all these mechanisms are a part of today’s world. This is an era of excessive moral relativism. It isn’t good to adhere to inflexible principles, but neither is it healthy for a society to have limits that are so uncertain.

Sigmund Freud – Theory of the Unconscious
The theory of the unconscious formulated by Sigmund Freud was a milestone in the history of psychology. This opened a strange and fascinating underworld. Read more »
Link copied!
Interesting Articles
Culture
The Green Tara Mantra: A Liberating Practice

Culture
The Benefits of a 10-Day Silent Retreat

I could write dozens of articles on the benefits of a 10-day silent retreat. I could spend hours and hours…