Jean-Michel Basquiat's life was marked by a strong desire to express himself through painting and, at the same time, by a strong self-destructive feeling that led him to die early, when he was 27 years old. Today's article will discuss the work of this talented man. 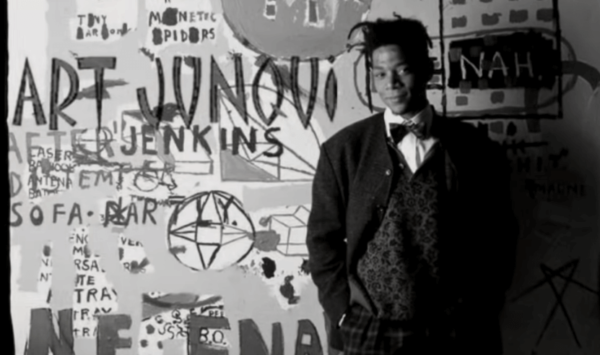 Jean-Michel Basquiat was creative, irreverent, surprising, and sensitive. He was a symbol of urban art and of the mixture of cultures and the sensibilities of contemporary man. His art, like his life, is an amalgam of tenderness and brutality, all in one.

This artist became known due to his graffiti and painting style. Basquiat also experimented with drawing, music, and even poetry. He may just be the first representative of a hybrid contemporary artist. The kind who’s not famous due to their talent but for the symbolism of their work.

Jean-Michel Basquiat died at the age of 27 but he made a mark in contemporary art. His was a wandering, lively, and tragic existence. His contempt for the world defined him and added a certain uneasiness that never left him. He captured it in his graffiti, paintings, poetry, and musical themes.

He was born on December 20, 1960, in Brooklyn, New York and was the son of Gerard Basquiat, a Haitian accountant. His mother was Matilde Andrades, a Puerto Rican graphic designer, who had a major influence on his work. His two sisters were younger than him. His ethnicity deeply impacted him. Thus, very soon, he came into contact with the new forms of urban art around him. Especially those in the marginal neighborhoods of the city.

Jean-Michel showed a great interest in drawing from a very young age. His father brought along wasted paper from the company where he worked and the boy would fill it with the sketches he copied from the dictionaries around his house. His mother tried to encourage him. She frequently took him to the local museums and also instilled in him her love for reading. Soon, little Basquiat became a voracious reader.

Later, he became interested in film and cartoons. In particular, he was deeply fascinated by Alfred Hitchcock. A vehicle ran him over at the age of eight and he had to stay in a hospital for a month. Thus, his mother gave him a Henry Gray anatomy manual to entertain him during his convalescence. This book had a decisive influence on his work.

Jean-Michel Basquiat’s life became stormy after the age of 11. His parents separated and he stayed with his father as his mother had a severe depressive condition. He ran away from home for the first time when he was 16 years old but returned later. At this time, his father sent him to a magnet school for gifted children. It was there where he met Al Diaz, his first art partner.

New York and, in particular, some of its slums such as the Bronx, had been experiencing the rise of a new type of art since the 1960s. Art was no longer exclusive to museums. Instead, it decorated the streets and bridges and alleys. The young people of the slums found a way of expressing themselves on the city walls, tinging them with art.

As a teenager, Basquiat began to formally engage in graffiti and also came into contact with drugs. Also, he began to hang out with street artists. Together with his friend Al, they filled the walls of New York with their graffiti, especially the Soho area. The main characteristics of their graffiti were poetic messages and unknown symbols.

Basquiat and Al Diaz signed their graffiti with the acronym SAMO, which stands for “SAMe Old shit”. During that time, he ventured into theater and music. He also ran away from home for the second time and spent more than two weeks taking acid. Thus, he was expelled from school, and, from that moment on, he decided to embark on a solo life-trip, leaving his home and studies behind.

Many of his works reflect the influence of the suburban culture where he grew up as well as his ethnic roots. He soon drew the attention of critics who started talking about the graffiti signed by SAMO. Soon after, he was part of the first group of graffiti artists to exhibit their work in a United States museum. Urban art was no longer exclusive to the streets but something worthy of a place in these institutions.

This began a period in which success led to severe drug addiction. In total, Basquiat held over 100 collective and 40 individual exhibitions. He was the youngest artist in history to be invited by the Documenta fair and the Kestnergesellschaft Museum in Hanover. He established a friendship with several artists, including Andy Warhol, who he teamed up with several years later.

Jean-Michel Basquiat loved to travel. He barely arrived from a journey when he was already embarking on another. Drugs and a strong self-destructive instinct marked his life. He squandered his money buying expensive clothes, cocaine, and heroin. He was also the victim of several robberies.

In 1988, he took a trip to Hawaii, in order to get clean. Then, he returned to New York on August 1 and stated he was clean. However, he died as a result of an overdose on August 12 of the same year.

The end of Jean-Michel Basquiat

His was a life full of ups and downs, of instabilities that ended prematurely. Currently, his name is still synonymous with innovation and street art. Above all, he’s an example of how urban art belongs in a museum as it’s worthy of celebration. This entails the loss of the ephemeral and also of the urban in a way, though.

Obviously, his work isn’t exempt from criticism and some contemporary artists consider it a mass phenomenon. They say he sold out. Street art wasn’t meant to be in a museum but in the streets. Thus, some people think it should stay in them until it disappears and there should be no interventions to conserve it.

Be that as it may, and regardless of your point of view about this type of art, what’s certain is that Jean-Michel Basquiat vindicated and gave voice to a movement considered in bad taste and marginal until then.

Street Art, Muralism, and Muralists
Some street art constitutes a good narration of a given story because people create them when the events are happening so they're sensitive to them. Read more »
Link copied!
Interesting Articles
Art and Psychology
The Psychology of Goya's "Black Paintings"