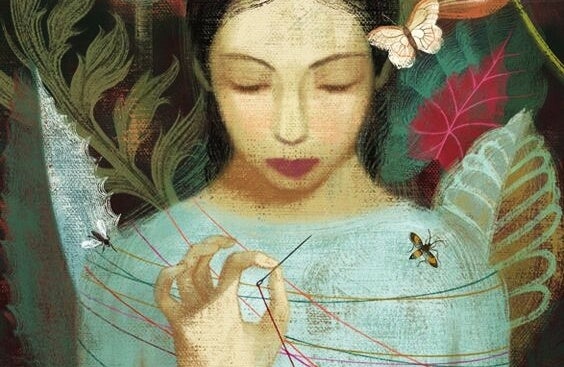 Emotional wounds are spread through family ties almost ruthlessly. They are like a shade that is camouflaged by words in the methods of child-rearing, in the silences, in the looks, and in the emptiness. Until someone who is mature and aware says “enough” and stops the process allowing escape from that spiders web.

All of us, at some point in our lives, have thrown a rock across the surface of a lake or river. As soon as it hits the surface it submerges, causing a disturbance. The water particles change from their initial position, creating what is known as wave fronts.

Everyone has a story, everyone knows how heavy their wounds are, their emptiness, their torn edges…

If the impact is hard than many more waves will be produced. It is like the echo of a silent scream, like the metaphor of an emotional wound, which impacts one member of a family only so that later it will settle upon future generations with more or less intensity.

It was Oscar Wilde who once said that there were very few areas that were more mysterious and secretive than families. Isolated behind the closed doors of their homes, almost nobody knows to an exact science what happens inside those four walls where one or two generations of people share a common space and the same keys.

The wounds of one person can have an impact on the others just like invisible waves, like the strings that move puppets, and like angry waves that erode the rocks on the beach with rage. So, we want to talk to you about something very complex, painful, and sometimes stark.

The Intimate Architecture of Emotional Wounds

When we talk about the origin of these emotional wounds that, in the long run, spread through the family ties, it is common to think about sexual abuse, physical violence, or the tragic loss of a loved one. Further, we cannot discount armed conflicts nor the impact on abandoned children living as refugees on many of our borders.

However, far beyond these aspects that are widely known by all, there are also emotional lacerations caused by other dynamics, by other methods that are much more common than those already mentioned.

Having grown up with an insecure attachment or a background based on emotional contention will, without a doubt, create many wounds, even emotional breakdowns.

Being part of a family where anger is always present is another trigger. These are backgrounds where screaming, reproaching one another, emotional toxicity, and ungratefulness abound, as well as continually being undervalued.

Another aspect that can cause a great impact within the family is if the mother or father suffer from chronic depression that goes untreated. Defenselessness, the lines of communication, and the established dynamics between parents and children leave permanent scars.

“Emotional wounds are the price we all pay for being independent.”
-Haruki Murakami

Conrad Hal Waddington was a research biologist, geneticist, and embryologist who coined a term that was both interesting and shocking at the same time. We are talking about epigenetics, the science responsible for studying all the chemical processes that modify DNA, without altering its sequence and where trauma has a huge impact.

So, all these epigenetic changes are also reflected in the new generations, to the point that an untimely trauma suffered by one person can affect up to four generations.

We have all heard that pain is a part of life, that we can learn from suffering, and it is necessary to forgive in order to move on. So, in reality these ideas all have important nuances that it is necessary to outline and re-interpret.

Let us see some of these aspects in further detail.

It is not necessary to suffer in order to learn. In fact, real learning is offered by true happiness. That is what lays the foundation for proper emotional balance, and is also what puts us in contact with what is truly significant for us. That which is truly worth fighting for.

Do not let your wounds turn you into someone you are NOT.

On the other hand, forgiveness is an option, but never an obligation. The most important reconciliation we have to carry out is that with ourselves. An emotional wound turns us into something we are not pleased with: into someone who suffers, who perceives themselves as fragile, not capable, someone full of anger and resentment, and who is a prisoner of the person who hurt them. Let’s learn to heal ourselves, to become reconciled with our hurt self to strengthen it, baby it, and take care of it.

Last, but not least, it is necessary to have certain strategies and protocols for the early detection of emotional wounds in children. Schools should have acceptable methods to detect as soon as possible, those secrets and defiant conduct that many times hide problematic family dynamics and dysfunction.

We cannot forget that, even though none of us can choose our parents or the family we come from, we all have the right to be happy, to live a life of dignity, with proper emotional and psychological balance. Fight for it.

Link copied!
Interesting Articles
Wellness
The Gift of People Who Enrich Our Lives

When we consider the people we truly admire in our lives, we may not be able to count too many. They…

Life can be wonderful, but realistically, it isn't always so, no matter how hard you try. Some good things will…

Educating our children in emotional intelligence is a necessary and essential task if we want them them to grow up to be healthy and strong. While we must work on emotional…