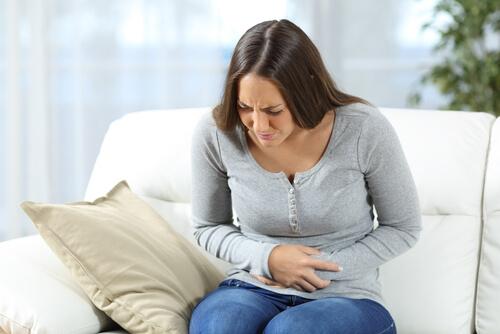 Diseases of the stomach tend to come with strong discomfort and emotional gastritis is one of the worst. Despite there being a multitude of possible causes for stomach pain, some of them seem to be due entirely to emotional problems. This is the case with emotional gastritis.

The disorder is because of  inflammation of the mucous that covers the inside of the stomach. It causes all sorts of symptoms and uncomfortable sensations. The main difference between this and other stomach problems is that it’s not caused by bacteria, but by stress and anxiety. In this article, we will investigate the main symptoms as well as how it comes about and what we can do to combat it.

What are the symptoms of Emotional Gastritis?

Just like many other conditions related to the gastric mucosa, emotional gastritis has a variety of symptoms that are narrowly related to each other. We have to remember that these symptoms can arise in an isolated form (in the case of acute gastritis) or continuously (in the case of chronic gastritis). Up next, we’ll take a look at the most common of these.

The most prominent symptom of the condition is stomach discomfort. In periods of high stress, this can be very severe. People who are affected by emotional gastritis describe it as being similar to the pain produced by stomach ulcers. This is no surprise, as in both cases, the source of the problem is inflammation in the gastric mucosa.

Those who suffer from this stomach condition frequently say that their appetite is considerably reduced when they feel the most strongly affected by it. In this way, it is common for patients to reduce the amount of food they eat per day. That can affect their well-being even more.

Also described as a feeling that food stays in the stomach a long time, the truth is that this symptom is related to poor digestion.

One of the most irritating symptoms of emotional gastritis is the feeling of acidity in the stomach. It is a burning sensation in our digestive system which can become especially unpleasant at times of peak stress levels.

When food does not process adequately many patients also note issues such as burping and frequent nausea.

Causes of the condition

As opposed to many diseases affecting the gastric musocsa, which come from bacterial infections, emotional gastritis is caused solely by emotional problems. If we ignore problems such as anxiety, stress, and frustration they can become chronic and produce this type of gastritis as a secondary effect.

If we cure the underlying emotional problems the symptoms of the disease may only occur in isolated cases. But, if we have a very anxious personality, emotional gastritis can also become chronic. It will become a problem that can only be treated from a psychological angle.

This stomach condition arises from emotional problems. It is important to combine treatments to combat it. The treatments must focus on three variables: medical help, emotional management, and changes in diet.

Let’s look at each one of these.

Just like the majority of illnesses related to stomach inflammation, we can reduce the symptoms of gastritis by using medication. Some such  medications are Omeprazol and Melox. These protect the walls of the stomach from excessive amounts of acid, reducing discomfort.

Even so, just as with mental disorders, pharmaceutical treatments should only serve as a complement to other types of treatment. They should not be used exclusively. They are good for masking the symptoms, but not for treating the root of the problem.

The principal cause of this type of gastritis is stress. So, the only way to cure it completely is learning to deal with negative emotions. For this, different treatments can be useful, from the use of relaxation techniques to psychotherapy.

Changes in your diet

Finally, experts have shown that some natural remedies can help combat emotional gastritis. In combination with the other two types of treatment, a healthy diet can help to eliminate its most bothersome symptoms.

Can Gut Bacteria Influence Your Emotions?
We like to use the saying "Mens sana in corpore sano" (a healthy mind in a healthy body) and studies show that it's true on many different levels. Read more »
Link copied!
Interesting Articles
Wellness
Emotional Instability: Going from Tears to Laughter

Yesterday you loved poetry and today you detest it. Last year you felt motivated to work out and we have…

Wellness
What is Transgenerational Trauma?

Transgenerational trauma is the transference of emotional, physical, or social pain from one person to their descendants. It goes much deeper…

If we want to educate our children to be strong, we must have it clear that emotional intelligence is the…