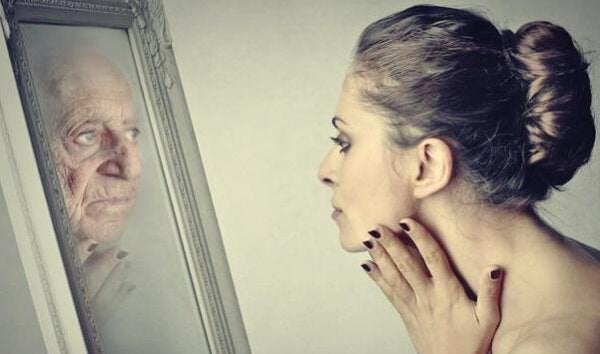 Dorian Gray syndrome is a set of symptoms quite telling of modern times. It consists of a resistance towards aging and an extreme fear that one’s body will get deformed as the years go by. Experts consider it pathological whenever it negatively impacts behavior.

The syndrome’s name comes from the famous novel The Picture of Dorian Gray by Oscar Wilde. Wilde narrates the story of a man who longs for eternal youth. Eventually, Dorian arranges for his portrait to go through the process of aging in his place.

“Age imprints more wrinkles in the mind than it does on the face”.

Vanity and physical appearance are disproportionately important in our world today. Dorian Gray syndrome came into existence as a manifestation of how obsessed we are about our looks. In fact, it has become such a problem that it now borders on pathological.

What is Dorian Gray syndrome?

Dorian Gray syndrome was described for the first time in 2000 by therapist Burkhard Brosig, who co-authored an article of the same name. He had noticed how many people were coming to his office in a near panic about aging.

The most concerning aspect about people with Dorian Gray syndrome is that sometimes they do dangerous things to hold back the aging process. They might have a lot of plastic surgery done and overuse Botox, for example. These procedures can be risky, especially if not done correctly.

It’s important to note that victims of Dorian Gray syndrome aren’t just obsessed with looking young, they also stunt their emotional growth. They want to keep seeing life like an 18-year-old, and do in fact keep behaving like a teenager.

There are still no standardized characteristics for Dorian Gray syndrome. However, Dr. Brosig was able to identify certain characteristics that seem to be quite representative of it.

These are the primary behavioral patterns that someone with this syndrome presents with:

These kinds of people almost always live their lives somewhere between fantasy and frustration. They fantasize that a new treatment or procedure will give them back their youth. When they realize that there’s still no fountain of youth, they get frustrated. However, they believe it’s a failure of science and surgery, not of their own perception.

What’s usually underneath Dorian Gray syndrome is a person who is terrified. Their greatest fear is being rejected for not meeting the beauty standards of their world. They think having a good body means having a good life. Unfortunately, they’re right — to some extent. Many companies do have superficial reasons for hiring or promoting workers, basing it on appearance and image.

Now, a person’s environment is what it is, but it’s up to each individual how to respond. Some won’t let their environment objectify them. Others, however, like people with Dorian Gray syndrome, passively bow down to the pressures. Why? Because they have a narcissistic vacuum inside them. They don’t value themselves enough and instead give too much power to social norms.

Underneath all of this is also a rejection of one’s self. A person with this syndrome cannot accept themselves as they are. They don’t recognize the power they have over themselves; they can’t see the autonomy that every human being has and so they become helpless. You will see them defending their environment while denying themselves.

They assert themselves by forcing themselves to be what others want them to be. This is exactly how anxiety turns into their constant companion and things escalate to such a point that they will likely need therapy to get well again.

5 Tips for Aging Happily
Many of us fear growing older. However, old age can be the best stage of our life. Here are 5 tips for aging happily. Read more »
Link copied!
Interesting Articles
Psychology
Stress: Wanting to Be "There" While You're "Here"

False generosity is one of the most common and harmful kinds of hypocrisy. They're the people who don't do favors out…

Psychology
Mowrer's Two-Factor Theory: This is How Your Fears Work

Despite the fact that Mowrer's two-factor theory was enunciated in 1939, it remains one of the most interesting models for…

Interesting Articles
Therapies
Donepezil as a Treatment for Alzheimer's Disease