Dolphin-assisted therapy consists of the use of dolphins to help people with mental or physical issues. Some studies say it may help. Read more here! 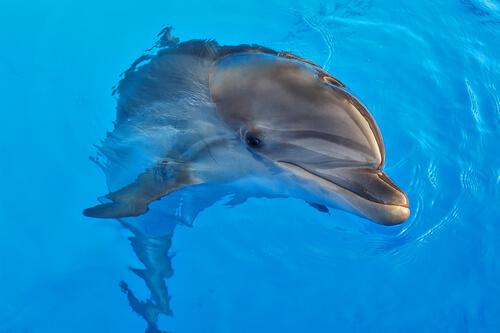 Animal-assisted therapy has proven to be extremely helpful for many medical conditions. In this regard, some people use dolphin-assisted therapy to treat psychological or physical issues. Therapists carry out these treatments in specialized centers or facilities in aquatic parks. During this therapy, psychologists and doctors work with the dolphin and the patient.

Proponents of this type of therapy recommend it because it has a calming effect on the patient. They also say it can boost mental activity.

What does dolphin-assisted therapy entail?

Dolphin-assisted therapy requires a patient, a dolphin, and a team of professionals. This team is usually made up of psychologists and doctors. In short, this is an aquatic therapy in which sensory activity is of the utmost importance.

Therapists use it to work with special needs children, such as those afflicted with autism or psychomotor retardation. Aside from that, adults with depression or posttraumatic stress disorder can also benefit from this therapy.

The therapy can also be applied in diverse forms, durations, or time frames. There are aquatic parks, for example, that administer this type of therapy in individual and personalized interaction programs. This may be necessary for some children. Other centers specialize in different types. In fact, some places are even using virtual reality to administer the therapy.

The origins of this type of therapy stem from certain studies carried out on children with autism. The studies claim that swimming with dolphins helped then. Sometime after they were published, a researcher named John C. Lilly further experimented with dolphins and children with psychological problems. Through encephalograms that he took after the sessions, Lilly determined that the children’s communication, mood, and movement improved due to the therapy.

What are the benefits of dolphin-assisted therapy?

Aside from the benefits we already mentioned, dolphin therapy also has many others according to its proponents. For one, the ultrasonic sounds of dolphin calls cause an endorphin release in humans. This can improve the patient’s mood. As a consequence, attention deficit and anxiety disorders can also improve. As for physical benefits, the aquatic environment and the presence of the animal can help reduce pain caused by physical problems or the side effects of drugs.

Research has shown that contact with animals can help treat all sort of disorders. It has also demonstrated that it can improve intellectual, physical, and social problems. It’s not an uncommon sight to see dogs in centers that offer therapy programs. Other studies claim that having pets can help small children. Aside from helping them develop a sense of responsibility, it increases their empathy. Pets are also a source of unconditional affection.

Whatever the case may be, we shouldn’t discount the idea that contact with animals is beneficial. The exact magnitude of this impact may be difficult to measure. However, it’s true that the research results have been very positive.

6 Benefits of Equine-Assisted Therapy
Equine-assisted therapy is a new type of therapy that is being widely used around the world. Read on to discover all its benefits! Read more »
Link copied!
Interesting Articles
Experiments
Sensory Deprivation and its Frightening Effects