Bowel and Brain - The Connection

The mind-body connection is now more likely than ever according to science. So, the time has come to reconnect with your body and take care of your mind. It's also time to adopt healthier eating habits and to begin to pay attention to the connection between your bowel and your brain. 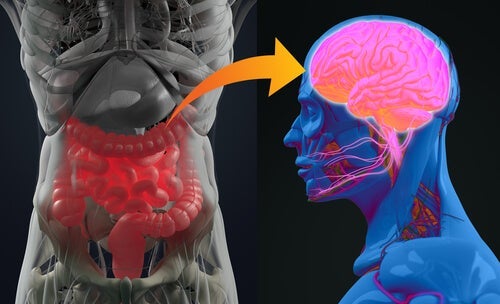 It’s long been known that there’s a close connection between the bowel and the brain. However, scientists believed that this relationship occurred only in the direction of the brain to the gut. Today, researchers know it happens in both directions.

The human gastrointestinal microbiota could be the origin of anxiety disorders and diseases such as Alzheimer’s. In fact, Dr. Emeran Mayer, a gastroenterologist and co-director of the Digestive Diseases Research Center in Los Angeles argues that the gut-brain connection is much stronger than what was previously believed. They basically concluded that both physical and emotional discomfort may manifest in the intestines.

The bowel and brain relationship

The vagus nerve is a channel that connects the intestine and the brain. It’s one of the twelve cranial pairs and in charge of uniting the pharynx, esophagus, larynx, trachea, bronchi, heart, stomach, and pancreas, among others. In addition, it links the other elements of the digestive system that have a large number of neurons.

Microbiota sends signals to the brain through the vagus nerve to promote specific eating behaviors. What happens is that it helps release neurotransmitters such as dopamine and serotonin. Thus, currently, numerous studies link gut microbiota with eating patterns.

The importance of gut microbiota

Investigations show that the gastrointestinal microbiota has a fundamental role. In weight, among other things, but more specifically in the reasons that determine whether people gain or lose weight. Actually, experiments with mice yielded surprising conclusions. In these studies, scientists introduced the sort of bacteria frequently found in the intestine of obese people into the diet of these animals and the mice gained weight. However, when the same diet contained bacteria harvested from thin people, the mice lost weight.

In addition, they conducted a study with mice reared in a sterile environment, one that had no bacteria that could colonize in their digestive system. What they found is that these mice displayed autistic behavior.

When a person sustains a stressful situation over time, the intestine slows down to reserve the energy for the brain. Thus, there’s also less blood flow to the gut. In addition, there’s a reduction in the mucosa lining that protects its walls and becomes thinner.

The bacteria then gets pretty close to the intestinal walls and produce chemicals that lead to inflammation. This leads to a change in the gastrointestinal microbiota; it produces various metabolites that end up in the brain.

Harvard University released some of the latest information about the gut-brain relationship. They showed how gut bacteria create molecules that travel to the brain when a person follows a certain diet. Then, these molecules act on astrocytes. And the action seems to block the inflammation processes that lead to the sort of neurodegeneration that triggers diseases such as Alzheimer’s and Parkinson’s disease.

The bowel and the brain – a vicious cycle

In light of the close relationship between the brain and the bowel, it seems one can now make better decisions from two different perspectives when it comes to the prevention and treatment of anxiety and stress. One could even get better results in the prevention of neurodegenerative diseases by following this line of research. This is because the changes in microbiota take place before the neurological symptoms even begin.

The bowel and brain connection – new habits are good for you

The findings regarding this connection are already providing clues about how a holistic approach to health will shape the future of the treatments and prevention programs currently in development.

The mind-body connection seems more likely than ever thanks to said research. It’s time to reconnect with your body; you must take care of your mind and improve your eating habits. You might even hear the kind of stories your body tells your brain.

Illness As a Conflict Between Mind and Body
The body talks and expresses itself through symptoms. Illnesses, wounds, pain, and discomfort indicate that something bad is happening in the body. Most of Read more »
Link copied!
Interesting Articles
Brain
Neurovisceral Integration Model: the Brain-Heart Connection