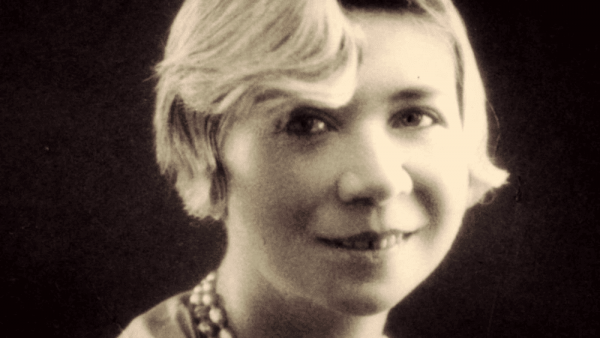 Alfonsina Storni was an Argentine poet and writer who was part of the modernism movement. Her life, which was both hard and passionate, permeates her poems, which show a  special sensitivity. Today we are going to look at some of her most famous phrases, remembering Alfonsina Storni as an important author for the feminist movement.

Alfonsina’s rebellion against the oppression of women in her time was noted both in her works and in her activism. Storni participated in campaigns in favor of sex education in schools and defended the right to vote of women in Argentina. Without a doubt, this all left an imprint. The following famous quotes from Alfonsina Storni will not only give us an idea of ​​what her life was like, but also show us to her particular vision of the world.

This first of the famous phrases by Alfonsina Storni draws our attention because of the adjectives used to refer to a man, “little little.” She, in her own words, suggests that this qualifier is synonymous with a lack of understanding, although this is reciprocal. However, she also mentions something else, a cage.

Alfonsina criticizes the cage, which represents her relationship with a man. However, in this relationship a cage signifies there is possession, control and the idea of the woman as property. The author highlights her need to escape, demonstrating that her freedom has been taken away.

You have one wish: to die. And one hope: to not die.

This second of these famous quotes of Alfonsina Storni shows the incongruity that exists within a person when he or she wants to die, but at the same time wants to live. Alfonsina considered that death was a choice that allowed her the free will that she craved.

The pain that Alfonsina felt after receiving the diagnosis of breast cancer left her with wounds much deeper than the physical ones. She isolated herself from  others, her depression worsened and she began to write subtly about suicide. An option that, unfortunately, she ended up choosing.

“What worlds do I have inside the soul that I have been asking for means to fly for some time?”

In this sentence, the author makes it clear that a need for freedom is growing within her, which at the same time gives her a different point of view from the society in which she lived. In this sense, her soul doesn’t seem to fit into the society around her, which is why it demands means to fly.

Alfonsina’s activism was driven at all times by her inner strength and by that need to get rid of rules that she considered shackles imposed by society. Whether it was through writing or other types of performances, Storni was a “literary heroine” who always fought for what she believed in.

“When leaving the springs leave the autumn drizzles prepared … Small one, go slowly, much judgment, do not burn out your flames”

Alfonsina had a strength and a character that led her to refuse medical treatment for her cancer after her diagnosis. She received the wrong diagnosis, doctors telling her what she had was a benign tumor, when in reality the situation was much more serious.

However, Storni was still aware that her refusal of treatment could have serious consequences. This is a teaching that we can apply to ourselves. How often do we act on impulses, quickly without thinking, and then we repent?

“Men of my race have not cried. They were steel.”

The last famous quote from Alfonsina Storni that we are going to mention makes a special note about the society of the time. Although today that idea still prevails that men must show strength by hiding their emotions and setting aside their sensitivity, the truth is that we are moving further from this idea because of the growing consciousness that is awakening concerning masculinity.

Alfonsina uses the term “steel” with a certain irony to emphasize the absurdity of the situation. This pressure that man must always be strong, especially in the face of such a human and useful emotion as sadness.

With which of these famous phrases by Alfonsina Storni will stay with you? This author invites us to reflect on a wide variety of topics, many related to freedom, in which how Alfonsina thought is completely exposed. Did you know about this author? Have you read some of her poems? We’ll leave you one of our favorites!

I am soft and sad if idolized,

I can lower the sky to my hand when

The soul of another entangles my soul.

Down couldn’t be any softer.

Nor snuggles so much in a dream,

Nor fits int0 another body, so small,

A human soul of greater tenderness.

I die over eyes, if I feel them

Flutter under my white fingers.

I know the phrase that I love and what it means

And I know how to be quiet when the moon rises

Huge and red over the ravines.

Eastern philosophers have a particular way of seeing life. They say that your thoughts create your world, but the rules…

It may seem incredible, but in recent decades there's been a rise in a social mandate that forces us to be…