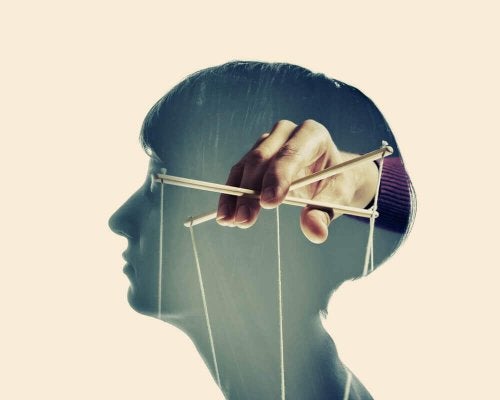 Manipulative people suffer and make others suffer. The way they act makes it difficult for others to be around them. Also, keeping them close might make it hard for us to be okay with ourselves.

Outlining their “modus operandi” is easy. However, fully understanding the way they are is a more complex task. Perhaps the first thing we should learn is how to recognize them. That way, we can help those who suffer from them as well as protect ourselves.

An excessive love for oneself is what mainly characterizes narcissism. Those with this characteristic tend to think they’re better than everyone else. They only value the comparisons in which they come out on top.

We can identify a manipulative person by the way they talk. Instead of having a genuine interest in what the other person has to say, they ignore them and focus only on what they need to say. Thus, they make others feel unheard and ignored.

On the other hand, manipulative people firmly believe they live a life full of emotion. That’s why it’s very likely for them to end up talking about moments where they were “heroic“. Even though this characteristic alone doesn’t have to be a symptom of this type of personality, it can tells us a lot about a person.

Machiavellianism is a personality trait that alludes to a very concrete tendency: treating others as if they were instruments or means instead of actual people. Not having someone suffer might be an objective, but it’s always going to be a secondary objective when it comes to progressing towards set goals. In order to do this, manipulative people resort to certain strategies like lying or blackmailing.

When dealing with someone with this profile, it’s normal to feel like we’re not doing what we really want to do. The manipulative person often convinces us to act a certain way, which makes the relationship become superficial in the long run.

A need to be above others

Manipulative people don’t want anyone else to succeed. They’re the only ones who are allowed to be in the spotlight and they’ll do whatever it takes to make that happen. These people don’t care if they have to make others feel bad in order for them to continue being the most outstanding people in a social environment.

For example, it’s not uncommon for these people to criticize others in a subtle way. In the long run, a constant interaction with a manipulative person will make an individual feel insecure.

On the other hand, manipulative people feel bad if they feel like someone is stealing their thunder while being in a group of people. This encourages them to do whatever it takes to get the spotlight back. They’ll start telling stories, they’ll speak louder, or even place themselves in the middle of the group.

Another very important trait of manipulative people is that they can’t stand when others succeed at something they aren’t good at. This has to do with their need to be better than others and be recognized, but it goes beyond that.

When a close friend reaches one of their goals, the normal thing would be to be happy for them, right? Well, a manipulative person will feel the opposite way. They’ll be very angry because someone else got something they don’t have. Due to this, they’ll start criticizing them, minimizing the importance of the event, or even distancing themselves from them.

What can we do about manipulative people?

As you can see, there’s nothing easy about having a relationship with a manipulative person. The relationships they create with others tend to be quite toxic. However, the level of discomfort they cause will depend on how serious their behaviors are towards other individuals.

When dealing with someone with this profile, there are only two possible things you can do: accept them and try to minimize the damages they cause or end the relationship. Both options are completely valid, but it’s necessary to realize what’s really going on before making a decision.

In the end, the most important thing you can do when it comes to a manipulative person is set boundaries. If someone is manipulating you or making you feel bad so they feel better about themselves, is having them in your life really worth it?

Envy Always Goes Hand-in-Hand with Criticism
Envy is considered one of the seven deadly sins, and it tends to go hand-in-hand with destructive criticism towards the object of envy. It is destructive Read more »
Link copied! Next
Interesting Articles
Psychology
Coping with Emotional Challenges on the Daily