The Effects of Heat on Cognitive Performance

The effects of heat can affect your performance, according to some studies by Harvard University. Ideally, you should stay in environments with adequate temperatures so it doesn't interfere with the development of your cognitive activities. 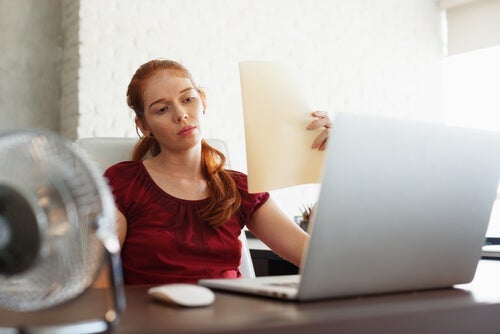 A scientific study conducted at Harvard University states the effects of heat on your cognitive performance. The investigation revealed that those with air conditioning performed better on their exams when compared to students without air conditioning. Thus, it recognized how heat negatively influences a person’s ability to think.

The Harvard T.H. Chan School of Public Health published an informative article called “Extreme heat linked with reduced cognitive performance among young adults in non-air-conditioned buildings”. Researchers found that those who lived in dorms without air conditioning performed worse on a series of cognitive tests during a heatwave. Mainly when compared to those students with an AC unit in their dorms.

Harvard T.H. Chan School of Public Health brings together experts from different areas to educate new generations of world health leaders. Its ultimate goal is the production of novel ideas that can improve the quality of life of people worldwide.

The institution advocates a fundamental goal: that the work of leading researchers, educators, and students can come together to translate the ideas they came up with at the lab into the language of people’s daily lives.

Also, it’s important to note that the institution has been around since 1913 as the Harvard-MIT School of Health Officers. Since then, people recognize it as the oldest professional training program in public health in the United States.

Research on the effects of heat

The field study demonstrates how the effects of heat negatively influence the cognitive performance of young, healthy individuals. Thus, interior temperatures during a heatwave noticeably impair their ability to use their intellectual abilities.

This research gives a substantial twist to the common knowledge about how harmful heat can be to the well-being of the general population, regardless of the age range or physical condition.

Until now, the effects of heat during high-temperature waves were only considered in children and older people. Today, Harvard reports that even young people with superior intellectual abilities are affected by heatwaves. This is because it significantly reduces their innate abilities.

José Guillermo Cedeño, a researcher at the Harvard T.H. Chan School of Public Health and lead author of the study, reported that “to address this blind spot, we studied healthy students living in dorms as a natural intervention during a heatwave in Boston”.

In addition, he maintains the importance of knowing the risks in different populations. He does so by taking into account that the number of heatwaves will increase due to climate changes in many cities.

Why study it on a global scale?

It’s important to study the effects of heat since climate change is present worldwide. Also, it has serious public health consequences. Precisely, it’s the main cause of weather-related death in older adults.

Climate change shows a remarkable range of temperatures at a global level. In fact, 2016 was the hottest year on record in the last two centuries. Even though there’s a proper record of heatwaves and their harmful effects on health, they only took a certain age range into account. They mainly took the most vulnerable population into account. Besides, they’re usually epidemiological studies, which mainly take outdoor temperature records into account.

Continuing to carry out research is essential for knowing how heat affects you and how to solve the problems that may arise from exposure to it. It depends on different variables, though. Thus, climate change could have devastating consequences on your quality of life. Therefore, the implementation of public policies to protect the environment is essential to preserve the quality of life for future generations.

Does the Climate Have an Influence on Violent Behavior?
Several Spanish scientists carried out a study that revealed that climate has an influence on violent behavior. Read this article to learn more! Read more »
Link copied!
Interesting Articles
Research
Adaptive Psychopathy: Empathy and Darkness