The Effects of Cocaine on the Brain

Cocaine is one of the most consumed and addictive drugs out there. Its effects in the brain are quite harmful, aside from the feeling of euphoria and well-being it initially produces. Continue reading to find out more about the effects of cocaine on the brain. 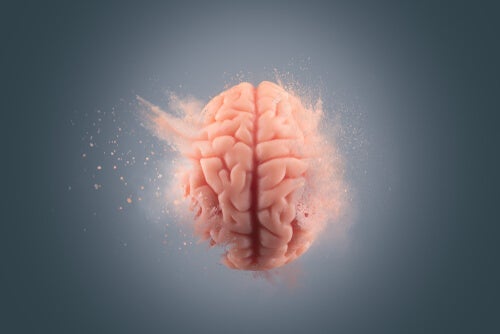 The effects of cocaine on the brain are devastating. This is the second most widely used drug in the world and it’s been a health problem since the 80s. The substance, which derives from the coca leaf plant, leads to feelings of euphoria, energy, and mental alertness in those who use it. It also reduces their appetite and sleeping needs.

In addition to these short-term effects, the consumption of cocaine has long-term consequences, such as emotional and behavioral disturbances. Continue reading to discover the main effects of cocaine on the brain at anatomical, metabolic, and functional levels.

This substance influences the noradrenergic and dopaminergic systems of the brain. Specifically, it promotes the release of norepinephrine, while inhibiting the reuptake of serotonin, dopamine, and norepinephrine at synapses. Thus, in the space between the communication of two neurons, also called the synaptic cleft, the availability of these neurotransmitters is much greater.

This effect leads to a series of long-term brain changes. In post-mortem examinations, scientists observed that the brains of cocaine users had a lower amount of dopamine in the striatum. Also, a lower density of monoamines and the expression of the RNA encoding the dopamine transporter. In addition, there’s an increase in microglia and macrophages. This means that cocaine use is related to a loss of dopaminergic terminals, as well as whole neurons.

This cellular damage creates reward pathways, of which the dopaminergic pathway is a part. It alters its functionality and produces compulsive consumption. Likewise, the diminishing presence of natural dopamine, a hypodopaminergic state, is the cause of withdrawal, depression, and craving symptoms.

Scientists also observed that the consumption of cocaine and other substances increases the presence of free radicals and oxidative stress. These cells, despite being necessary, are an integral part of aging and cell damage. In addition, they interfere with the function of the blood-brain barrier. This is essential for protecting the brain from harmful external agents and maintaining homeostasis.

Cocaine use is also directly related to effects on the cerebral vasculature, making the occurrence of a stroke more likely. Also, there’s an increase in the tumor necrosis factor.

Functional effects of cocaine on the brain

The changes and damages mentioned above have a series of consequences on the neuropsychological functioning of consumers. In general, cocaine users perform badly in neuropsychological evaluations. These effects manifest in attention, memory, inhibition of response, and executive functions.

More specifically, cocaine affects the processes of selective and sustained attention, working memory, visual memory, and learning capacity. In fact, these effects are more evident during periods of withdrawal.

Regarding executive functions, cocaine users have more failures when it comes to inhibiting responses. They’re also more impulsive and less skilled at making decisions. This is also linked to less flexibility in the face of change and a lower ability to process mistakes and handle incidents.

In short, cocaine use, possibly the most addictive drug, affects consumers at many levels. In addition to the effects described here, there are many emotional, behavioral, and social consequences that affect a person’s quality of life.

Cocaine: Types and Effects
Cocaine is a powerful stimulant. It is extremely addictive and used almost exclusively as a recreational drug. It comes from the coca leaf. Read more »
Link copied!
Interesting Articles
Brain
Why Do We Confuse Left and Right?

The orbitofrontal cortex is one of the most interesting parts of the brain. It's related to our personality, our emotions,…