The Connection Between a Psychopathology and Early Deprivation

The relationship between early developmental deprivation and the emergence of psychopathological symptoms was the subject of a longitudinal investigation conducted by professionals at the University of Southampton. Today's article is a report and reflection of its results. 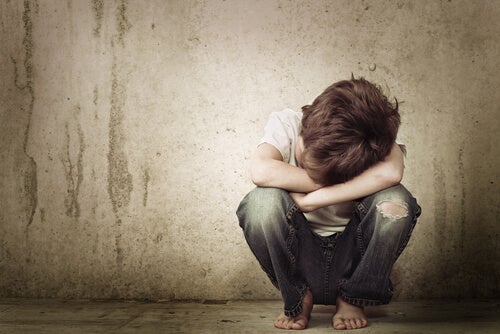 One of the great purposes of psychology in the experimental field is to discover the origin of psychopathology, of psychological disorders, that is. It seems like an unattainable goal because other factors besides genes determine the onset of a disorder. The environment also plays an essential role in the development of an individual. Furthermore, it’s the combination, the phenotype, for example, that explains either the appearance of a psychopathological disorder or its non-expression. Some relevant aspects of the environment that can influence the phenotype are education, family habits, or, as we’ll explain in this article, early deprivation.

One of the keys researchers have investigated in regard to the emergence of psychopathology is early deprivation. It refers to precarity, lack of care, stimulation, or hunger during the early ages of development.

Numerous articles highlight the relationship between these two constructs through longitudinal studies and by investigating concepts such as resilience. One such research investigated the phenomenon of mass adoption of Romanian children by British families during the fall of Dictator Nicolae Ceausescu.

“If the sound of happy children is grating on your ears, I don’t think it’s the children who need to be adjusted.”

The aforementioned study-evaluated the children from the time someone adopted them to adulthood. It defined the early deprivation these Romanian children experienced in overcrowded orphanages. All related to lack of cognitive and social stimulation, personalized and individual care, hunger, and poor hygiene.

The context in Romania was bleak. The dictator had tried to pay off the debt the country had accumulated from its rapid industrialization by exporting all agricultural production. The result was a nation that was starving after a civil war. The children in orphanages experienced a high degree of deprivation during the dictator’s demise.

The research consisted of three groups of children. Two groups had Romanian children deprived in orphanages and subsequently adopted by British families at various times.

The study consisted of assessing the children in the three groups at the ages of six, 11, and 15. They also assessed them when they became young adults. The researchers wanted to measure the emotional management of such a difficult age change.

The psychopathological symptoms the experts evaluated

The disorders measured in the study were:

These adopted Romanian children grew up and researchers evaluated them at the different ages or phases of the study. Thus, they observed how the three initial hypotheses found empirical support:

In addition, there were more children with several different psychopathological symptoms in the more deprived group. In fact, 34 percent of the children in that group presented at least one symptom at all ages. The percentage dropped when they reached young adulthood.

Other interesting data concerned the lifestyles of the young adults in the three groups. The researchers noticed that young people with higher levels of early-deprivation went less far in their education. In addition, they had a higher rate of unemployment. Also, young people in the same group made greater use of mental health services – psychologists and psychiatrists – during all analyzed ages. Finally, three individuals in the most deprived group had a borderline personality disorder, two had bipolar disorder, and two more of them experienced psychosis.

The results of this study evidenced the existence of a relationship between early deprivation in the initial stages of development and psychopathological symptoms, at least those evaluated here. However, the interesting part isn’t limited to the fact that this relationship was there. It’s also related to the kind of intervention a person can do.

There was a small percentage of children in the most deprived group – 15 individuals – who had no disorder at any of the ages tested. This puts the spotlight on genetic, epigenetic, and resilience studies. This is because these may explain why these children experienced deprivation but didn’t develop disorders like the others. Knowing this may elucidate what strategies to put in place so that, despite a past starring deprivation, a child can develop properly.

Regarding the evaluated cognitive impairment

The researchers observed it seemed to balance with age in the three groups. This fact precipitates an interest in studies on the neuroplasticity of children and how their brain compensates for their substitutions.

The results of emotional problems that became noticeable in adolescence could also be due to a latent vulnerability related to any stress experienced as a child.

The fields of study stemming from this research seem promising. However, one measure that’s ready for implementation on the basis of the results presented above is to provide early-deprived children with continuous psychological therapy once they’ve been adopted. One must pay special attention to the most frequently diagnosed disorders in the most deprived group and focus the therapy on the difficulties that may stem from them.

Marasmus: The Importance of Affection in Early Childhood
Marasmus is a type of extreme malnutrition that occurs before the 18 months of age because the mother stops feeding the baby. Learn more with us! Read more »
Link copied!
Interesting Articles
Research
Curiosity and Hunger Share Brain Regions

Curiosity and hunger share brain regions. This is a fascinating fact because these are two basic human needs and because…

Experts think that several factors cause depression. However, they recently considered two of them to be of particular importance. The…