Everyone has reminisced about old times. We’ve all felt nostalgic about how things used to be. We think about fame and how ephemeral and fake it can be. For these reasons and so many more, we love the TV show Paquita Salas. 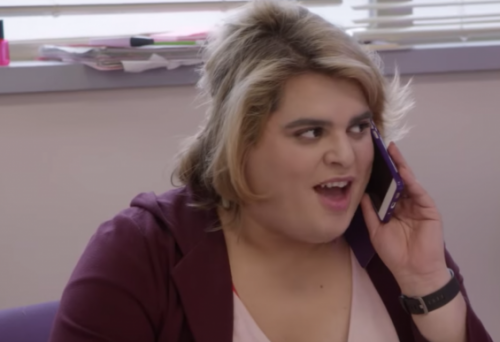 TV series are no longer low-quality shows that you watch when there’s nothing else on TV. On the contrary, people now binge watch them. In fact, they sometimes even overshadow cinema. The viewer doesn’t have to deal with annoying commercials anymore or wait to watch a show at a certain time. With a dose of nostalgia for past times and, above all, with the intention of making us smile, arose the show Paquita Salas.

TV shows are now high-quality. The fact that they last way longer than a simple movie allows for better character development which, in turn, allows the viewers to get to know the characters a lot more. However, this has put comedy on the back burner. When you think about the most popular series of recent years, you’ll realize that most of them are of different genres. But with everything that’s going on in the world nowadays, we need to laugh more than ever.

By this, we don’t mean that comedy series no longer exist. Nonetheless, it’s true that the TV world has advanced so much that it’s made the comedy world reinvent itself. Nowadays, viewers notice every single mistake and don’t forgive any. As a consequence, this has put major pressure on creators. Viewers are a lot more demanding because they know there’s a wide range of options to choose from. In turn, new platforms have created spaces where it’s easier to come up with original content.

Paquita Salas was created by Los Javis, Brays Efe, and Anna Castillo. What at first were going to be Instagram videos became a Flooxer series that later became a Netflix series.

The budget increased significantly once the series partnered up with Netflix. As a result, the quality increased and, of course, its dissemination. There’s no question that Paquita Salas is quite a successful show. In fact, they’ve already confirmed an upcoming 3rd season. Why is it so successful?

With an approximate duration of 20-25 minutes per episode, and with a total of 10 episodes per season, Paquita Salas is a fun series that’s easy to digest and that doesn’t require too much time. Its main goal is to make the viewers have a good time.

Paquita Salas is anything but complicated. This isn’t a series that will keep you glued to the screen for hours nor does it require great mental effort to understand it. This series is all about giving the viewer a space where they can sit back, relax, and enjoy a fun comedy. An important aspect we must mention, though, is that it wouldn’t hurt the viewer to have certain knowledge of the Spanish television culture of the 90s and 2000s to understand it better.

Series like ¡Ala…Dina!, A las once en casa, or Ana y Los Siete were major hits back then. These are series that we now see from a distance, some with nostalgia and others with shame. Many of the faces that flooded the screen back then have either vanished from the pop culture world or gotten irrelevant roles in other productions. Something that was successful one day can become a total flop the next. Times change, as well as people’s tastes.

This is what Paquita Salas experiences during the series. She’s a woman who had her glory years as a talent manager but who, unfortunately, is now outdated. Everything about Paquita is peculiar – from her old-fashioned clothes to her obsession with fried pork ribs. Basically, it seems like she never adapted to the 21st century. She continues to live her life reminiscing on her glory days and doesn’t seem to be happy with all the changes.

Paquita Salas reminds us that there’s still space for pure entertainment, to laugh at the world, the present, and the past. This series is incredibly amusing, which is why we love it so much.

The world of losers

The term ‘loser’ is very pejorative. Calling people that is rude and disrespectful. Well, this is a commonly-used term in Paquita Salas. In the show, they talk about stars that were very successful at one point in time and now only relive their glory days in their minds.

During the 90s and 2000s, Paquita represented important TV actresses such as Lidia San José, whose fame faded away. Paquita became an old talent agent, which is why no new or popular stars want to be represented by her. Despite this, she continues to try her hardest to keep her business afloat.

An incredible fact about this series is that many well-known faces (including the aforementioned Lidia San José and Ana Obregón) act in it. Los Javis were instrumental in making this happen since many known actors decided to collaborate in Paquita Salas thanks to them.

Paquita measures success according to the number of Pasapalabra, a Spanish game show, her artists have been in. The reason for this is that, more often than not, television programs are better paid than a small film or TV role. In such a saturated market, it’s necessary to stand out and be the best, something that has favored Paquita’s competitiveness and decay. Paquita Salas gives a great overview of both new and old show business, which helps us realize that the world has changed and that fame is weak and ephemeral, just like success and beauty.

The movie world, unfortunately, is way too akin to people’s physiques. Fat people are always laughable, which is, in some way, Paquita’s case. Brays Efe himself (the actor who plays Paquita) mentioned this at the Feroz Awards. In his speech, he talked about the relationship between looks and acting and reminded us that it’s bad to be obsessed with how we look.

Film and television should care more about acting quality than physical appearance. If they want to portray the real world, they shouldn’t focus on hard-to-reach aesthetic canons. Although Paquita is fat and funny, the truth is that she’s also self-aware and doesn’t strive to be thin.

An actor embodying a woman, old TV faces who didn’t get any other successful roles, actors and actresses of all kinds… Paquita Salas breaks barriers, showing us that it’s okay to make a unique series without leaving aside the harshness and cruelty of the entertainment world.

Beginnings aren’t easy for anyone, but trying to fit into the entertainment world and be successful in it can be taxing and costly. Auditions may seem all fun and games, but they’re not as easy as they may seem. In fact, it’s really hard for a producer to accept a project or an actor to get a role.

Paquita Salas reflects these beginnings very well, as well as the competitiveness and the barriers that exist in the entertainment world. In addition, it tries to break them and open the pathway to uniqueness. Brays Efe wasn’t a well-known actor before Paquita Salas. Despite that, he shows great talent to the point where we often forget a man interprets Paquita.

Fun fact: The show had an open casting call for its third season, meaning anyone could go to it. Just like Paquita, we all want new, interesting actors.

A small adventure that began as a low-budget series became a benchmark in Spain. Paquita Salas isn’t just a comedy series. It manages to represent the world of losers who do their best to swim while being surrounded by sharks.

A Person’s True Essence is Worth More than External Beauty
I like people who don't judge a book by its cover. I like people who are curious, passionate, enthusiastic, and patient enough to savor each page and find the true essence of it. Read more »
Link copied!
Interesting Articles
Biographies
Picasso, a Biography of the Father of Cubism

Do the following exercise when you have a chance: look around you while in a crowded area (the subway, the…