Everyone knows the complexity of dementia in all of its varieties. As if these weren't enough, there's now a newly recognized type: LATE. It could be one of the many misdiagnosed Alzheimer's cases. Continue reading to find out more about it. 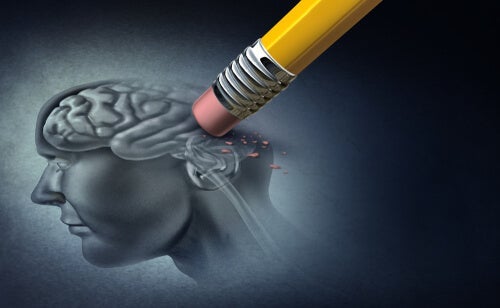 Alzheimer’s disease currently affects over 46 million people. Thus, the study of dementia, in general, is one of science’s greatest challenges nowadays. Despite having come a long way, there’s still much to discover. Therefore, it’s also inevitable that scientists will continue finding new disorders. An example of this is the discovery of LATE, a new type of dementia.

Although there are several known types of dementia and there’s a possibility that they might blend with each other, certain inconsistencies caught the attention of scientists. For example, patients with severe Alzheimer’s disease who were over 80 years of age, cognitive decline exceeded expectations. Apparently, this new type of dementia could explain these gaps.

The acronym LATE refers to predominantly limbic TDP-43 encephalopathy associated with age. LATE is related to the TDP-43 protein. Scientists already knew about it and that it also plays a role in other degenerative diseases, such as amyotrophic lateral sclerosis (ALS) or frontotemporal lobar degeneration (FTLD).

TDP-43 is a protein that binds to RNA and DNA and performs multiple functions of gene expression regulation.

Thus, the proposed new type of dementia, LATE, manifests in old age, especially in people over 80. Thus, working groups for the diagnosis of Alzheimer’s disease came up with this term. They did so with the intention of including other general TDP-43 proteinopathies. Some pertaining to cognitive impairment, including, for example, hippocampal sclerosis and its subtypes.

There’s a connection between TDP-43 proteinopathy and pure progressive amnesia that’s very similar to Alzheimer’s disease. This, along with the lack of knowledge and evidence to diagnose live proteinopathy, led some scientists to take steps on the matter. They must discover if a large percentage of people diagnosed with Alzheimer’s disease could actually have LATE.

TDP-43 proteinopathy implies the loss of its normal immunoreactivity, along with the transfer to the cell cytoplasm. It also implies an abnormal accumulation of the protein.

“I hate to sound this way but, why me? Why me with dementia?”

How to observe it

Currently, scientists can only observe TDP-43 alterations through a brain autopsy. Thus, they do so post mortem. Based on these types of studies and their findings, experts came up with a three-phase disease evolution proposal:

Like other forms of dementia, LATE manifests with amnesia, which can evolve and affect other cognitive domains that affect daily activities. However, certain parts show a somewhat different pattern.

The little evidence that exists indicates that patients with LATE show a more gradual decline in comparison to Alzheimer’s patients. In addition, as expected, those with LATE and Alzheimer’s comorbidity decline more rapidly and their symptoms are more severe.

People with LATE have a more noticeable deterioration in episodic memory. But they also show severe involvement of other functions, especially in the later stages. For example, it seems that patients with good verbal fluency have a higher risk of developing LATE, despite their poor ability to remember a list of words.

It’s still too early to establish neuropsychological profiles. In fact, as of yet, there are no neuroimaging instruments with which to observe the alteration of proteins in vivo. Thus, we can only wait for future research to bring new biomarkers and indicators, as well as motor, autonomic, or neuropsychiatric characteristics.

Detecting Dementia during Primary Care Visits
Detecting dementia during a primary care visit can be the key to delaying the illness's progress and the patient's loss of autonomy. Read more »
Link copied!
Interesting Articles
Research
The Impact of Happiness on Health According to Harvard