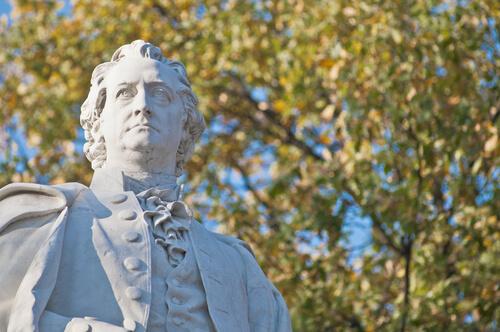 Some of the best quotes in all of German literature come from Goethe. This great man of letters was not only a writer but also a poet, playwright, and scientist. His wisdom spans from medicine to theology, physics to poetry.

Although the climax of his literature career was Fausto, he also wrote the controversial epistolary novel The Sorrows of Young Werther. It was such a success that it unleashed a wave of youth suicides, hence the name of the Werther effect.

Goethe never stopped learning and being interested in the world all the days of his life. His idiosyncrasies can be seen in the Sturm und Drang movement, a precursor to literary Romanticism.

What characterizes Goethe’s writing? Unease with modern society, allusions to witchcraft and the devil, and sentimental exaltation. His quotes we want to share with you now are full of wisdom and intelligence.

There is no past we can bring back by longing for it. There is only an eternal now that builds and creates out of the past something new and better.

For Goethe, the past needs to stay in the past. It’s not enough to just not think. We need to act according to this life philosophy. He himself fell into terrible depression due to the French Revolution. He did not understand why social establishments were going to change, and even less why blood was shed because of it.

To stay trapped in the past only creates problems, and it doesn’t allow us to appreciate the happiness we have in the present. Darker times will come, but for the time being, enjoy what you have.

Goethe here talks about how everyone wants to be recognized and admired, but no one thinks about reflecting on themselves as a person. When they get fame and fortune, people stop polishing and perfecting themselves. They stagnate and forget about growing, trapped beneath the rubble of their own vanity.

If we think more about growing than being, maybe the world will become a better place. Giving up on your potential for the sake of conformity is a huge mistake.

Talent is nurtured in solitude. Character is formed in the stormy billows of the world.

It’s ironic that a member of Sturm und Drang would say something like this. Goethe had a rather impetuous character. He was creative, curious, restless, and that’s why he triumphed. And he believed that solitude and moments of isolation were necessary for any person who wished to have any intellectual virtue.

All of us need quality time for ourselves. In order to intellectually mature, there must be a balance between activity and rest. Otherwise we won’t be able to achieve anything worthwhile.

With this quote, Goethe sums up the myth of Pygmalion and Galatea. According to Greek legend, Pygmalion, a sculptor from Cyprus, carves a sculpture based on his ideal woman. He worships it so that Aphrodite, the patron of Cyprus, takes pity on him and converts the sculpture into a real woman.

Actually, this myth is the basis of the famous Pygmalion Effect: if you treat a person as a failure, even if they greatly excel at their work, they will end up failing. On the other hand, if you encourage them and allow them to believe that they can do it, their own behavior will lead them to triumph.

It is a great error to take oneself for more than one is, or for less than one is worth.

Once more Goethe hits the nail on the head. Human beings believe that they are always better than others, but the moment of truth uncovers all. Learning to love yourself is fundamental, as long as you don’t cross the line into arrogance.

No genius is admired as much as she who is humble and does not need constant approval. A person who uses deceit, exaggeration, and self-importance to impress others does not deserve envy.

The Werther Effect – Why Suicide Can Be Contagious
The Werther effect refers to the phenomenon of imitating the suicides of famous people and in this article we ask whether there is any truth in the theory. Read more »
Link copied!
Interesting Articles
Culture
7 Toxic Behaviors that Push People Away

Psychology Today
How to Get Your Life Back After Home Confinement

Few things are as uncertain as thinking about what life will be like after this home confinement. Our minds are…

The words that Isabel Allende spoke and that we've gathered here, are full of passion and commitment. The same goes…

Sometimes, there's a pathological distance between how you feel and what you share on social media, which can be a…