Adolf Wölfli projected his inner world through his work. He used a creative process to try to order his inner chaos. However, you may have never heard of him. If that's the case, in this article, you can take a look at his life and immerse yourself in his world for a while. 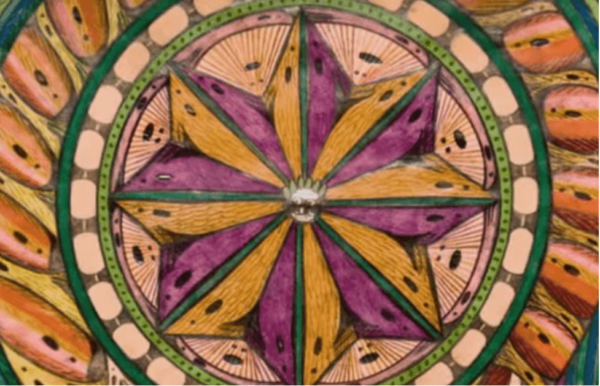 Artists are always surprising us with the ways in which they portray their world. Sometimes, they wear a mask and deceive us. However, at other times, we’re able to construe the details of their life from their work. It’s an interesting fact that art doesn’t only beautify our world, but it also creates new worlds. Indeed, Adolf Wölfli was the kind of artist who created a different world through his paintings and drawings. Furthermore, even now, both his life and works continue to surprise us.

Wölfli remains one of the most famous art brut artists. Art brut is an art that’s created outside academic and cultural boundaries. Wölfli created works characterized by “horror vacui”. In other words, he filled every available space in his creations.

However, this wasn’t the only surprising thing about him. In this article, you can immerse yourself in his artistic and mental world as well as his projections. Submerge yourself in the fascinating and turbulent art of Adolf Wölfli.

Wolfli was born in Bowil, canton of Bern, Switzerland, on February 29, 1864. He and his family lived in extreme poverty. His mother worked in a laundromat and his father was a quarryman. His father had problems with alcohol and got involved in crime. Consequently, he spent considerable time in prison. He eventually abandoned the family when Wölfli was five years old. Two of Wölfli’s brothers died before they were three years old. In addition, his other two brothers spent time in prison due to petty crimes. Wölfli’s mother ultimately found it difficult to cope and fell ill.

Wölfli was separated from his mother due to the laws of the time. These laws decreed that people in this type of situation were sent to work on farms. Wölfli continued both working and studying. Furthermore, he achieved good grades. However, he suffered serious abuse at work.

He enlisted in the army. However, it was there that he was charged with sexual assault on minors. He served two years in prison for this offense. He was later released and found work. However, at work, they weren’t happy with him. This was because he was aggressive and inclined to religious outbursts.

Wölfli attempted to carry out another assault on a nine-year-old girl. After this, they admitted him to Waldau Psychiatric Hospital. There, medical professionals diagnosed him with schizophrenia. In fact, he stayed in the hospital until he died in 1930.

The mental health of Adolf Wölfli

Wölfli was aggressive and suffered hallucinations when he was first admitted to the hospital. Indeed, for a while, they placed him in solitary confinement.

In 1899, he began to draw. He drew in a spontaneous manner and often became irritable because his companions ripped up his drawings. However, doctors claimed that he was calmer since he had taken up drawing.

Walter Morgenthaler was a psychiatrist at the hospital. He encouraged Wölfli in his creative work. In fact, Morgenthaler gathered up Wölfli’s work and published a book in 1921. He called the book A Mental Patient as Artist. This was a historic moment because nobody had ever described a psychiatric patient as an artist before.

The works of Adolf Wölfli

Adolf Wölfli had a compulsion to write and draw. However, only fifty pieces of the work that he carried out before meeting Morgenthaler remain. These are pencil works. In these works, Wölfli seems to be searching for symmetry. Furthermore, he organizes shapes in such a way that they resemble mandalas. Graciela García Muñoz is a creative director and expert in art for social integration. He wrote a doctoral thesis called “Creative Processes in Outsider Artists”. Muñoz suggests that the main figures in Wölfli’s works are the bird, the snake, and the triangular-shaped face.

Wölfli also used bell shapes, the letters B, E, H, I, N, and Z, his initials, and the series two, four, six, eight, 16, and 32. He also drew a lot of crosses, triangles, circles, squares, spirals, and ovals. His most outstanding themes were those of transformation and rebirth.

Viewers of Wölfli’s work identify them as drawings. However, Wölfli himself saw them as works of sound. Indeed, he signed them off not as an artist, but as a composer.

Adolf Wölfli also wrote. He usually wrote on sheets of paper folded in the middle. He wrote books in which he told the story of Doufi, his childish alter ego. Doufi had adventures all around the world. Wölfli included maps in his texts to contextualize the adventures. He also included his own ten commandments.

Wolfli wrote seven books dedicated to the origins of creation. He called this collection St. Adolf- Giant- Creation. These books were in synch with Doufi’s story. They also showed buildings that this character created. Wölfli also wrote about the young man’s journey with his friends through the cosmos under the direction of God the Father.

Wölfli also wrote books full of music and rhymes. He practiced the art of collage in these books. His final work was his most creative. However, he died before completing it. There was real musical value in Wölfli’s works. Indeed, he actually included compositions inside them. In fact, these scores have inspired some musicians who verified Wölfli’s knowledge of music theory.

Relationship between Wölfli’s mental health and his works

When it comes to the relationship between Wölfli’s mental health and his works, it was said that his creativity was the one thing that calmed his aggression. Indeed, it’s often been noted that his amazing artistic productivity was tied to his compulsive behavior. Furthermore, the messianic ideas we see in his works might be evidence of his psychosis. In addition, he included each one of his childhood traumas in his works.

Wölfli showed anguish and restlessness in his creations. At the same time, his work makes us feel that we want to learn more about his world. Perhaps he used symmetrical structure and the geometry of mandalas in an attempt to order the chaos of his inner world. In fact, it seems he used it as a way of containing his anxieties.

Wölfli’s legacy is summed up in a total of 25,000 pages of his own writings and drawings. It’s clear that art fulfilled a therapeutic purpose in his life. Indeed, his world shows us the evolution of both an artist and an illness. Chaos, impulses “vacui horror”, battles, aggression, drama, infinite decimals, music, anguish, the spiral of life, transformation, a sacred universe, micro universes, and a strong desire for order are the characteristics of his work. In fact, even today, we continue to feel rather unsettled by the works of Adolf Wölfli.

The Influence of Emotions on Creativity
Embracing pain and negative emotions in general, and viewing them as a fundamental part of our existence, is an inherent characteristic of creativity. Read more »
Link copied!
Interesting Articles
Biographies
Ronald David Laing: A Schizophrenia Reseacher