The 10 Best Quotes by María Montessori 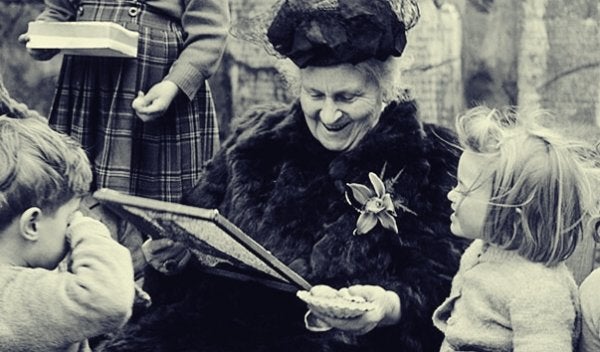 María Montessori is one of the greatest minds of the 20th century. She was a doctor, psychologist, psychiatrist, philosopher, anthropologist, biologist, pedagogue, and scientist. Her baggage was impressive. In fact, she was the first Italian woman to receive a professional degree in medicine. Her quotes are memorable and influence today’s education.

María Montessori revolutionized education. Her ideas and conclusions had an impact on pedagogy all around the world. Nowadays, many of her precepts are used on an everyday basis, though the user doesn’t always realize this.

In María Montessori’s quotes many of the ideas that she wielded about education are reflected. Her approach to education was to be loving and respectful towards the child. She gave games important value and granted autonomy a central place. These are some of her most remembered affirmations.

“The true objective of movement is not to favor better breathing or nutrition, but rather to serve all of life and the spiritual and universal economy of the world.”
-María Montessori-

Quotes by María Montessori about help

One of the best quotes by María Montessori is, “In reality, he who is served is limited in his independence. This concept will be the foundation of the dignity of the man of the future; ‘I do not wish to be served, because I am not an impotent.’ And this idea must be gained before men can feel themselves to be really free.”

The concept of help for María Montessori always warns about the consequences of not clarifying what qualifies as support and what doesn’t. Making things easy for children instead of helping them only serves to stall them. This is very defined in another one of her well-remembered phrases. “Any unnecessary help is an obstacle to development.”

The meaning of education

María Montessori established a close bond between education and freedom. One teaches and learns in order to be more independent and autonomous. In order to avoid manipulation and be able to act consciously and free of pressure. Hence, another of María Montessori’s quotes states, “Development takes the form of a drive toward an ever-greater independence. It is like an arrow released from the bow, which flies straight, swift and sure.”

The teacher is a guide in this process towards autonomy. They can’t, nor should they, make their students subordinate to them. On the contrary, the teacher’s objective is to have their students need them less and less, and not to be so dependent on them. This is very well captured in one of María Montessori’s most beautiful quotes. “The greatest sign of success for a teacher is to be able to say, The children are now working as if I do not exist.”

Montessori was certain that education was a key factor in changing the world. She thought that this was the area to give the history of humanity a better direction. She stated, “If salvation and help are to come, it is through the child; for the child is the constructor of man.”

Likewise, another one of María Montessori’s quotes points out the following, “Education from the beginning of life could really change the present and future of society.” In the previous quote, as well as in this one, emphasis is placed on the value of children as the constructors of new realities. In the determining role of education as the field that makes these great changes possible.

The physical world and the mental world

An important part of María Montessori’s pedagogical method is based on facilitating the child’s interaction with their reality. To not have them observe it, but have them come into actual contact with it. You must help them explore and learn from their experiences. María didn’t see a sharp division between the physical and the mental worlds. On the contrary, she found that these two dimensions complemented each other perfectly.

This is reflected in the phrase, “If we consider physical life on one side and mental life on the other, we break the cycle of relation, and the actions of man remain separated from the brain.”

How to transmit education to a child

For María Montessori, education was an integral process. It’s no good solely forming intellects, but instead integral individuals. That’s why teaching is not only about transmitting knowledge. It’s also an ethical act, one of respect and love. The great difference between education and instruction is clear in the quote, “The best instruction is that which uses the least words sufficient for the task.”

The Montessori method is one of the most lucid and intelligent in all pedagogy. Its impact is incalculable. Almost a century after its creation, it is still valid. And it stays that way because it is the fruit of deep sensitivity and overwhelming clarity.

Culture
The Importance of Self-Love When Choosing a Romantic Partner

Feminism ultimately seeks equal rights and opportunities for women. In order to achieve this, feminism seeks to end male dominance and eliminate gender roles. Although feminism seems to have more…

Culture
The Cow and the Ravine: A Moral Story to Make You Think

This moral story began in a faraway Buddhist monastery. A restless young man arrived there one day, wanting to learn…

Interesting Articles
Philosophy and Psychology
The Cognitive Psychology of Religions