The Desire to Pretend on Social Networks

The desire to pretend on social networks seems to be promoted by our inherent need for social approval. We need to be accepted and have our opinions reinforced by others. 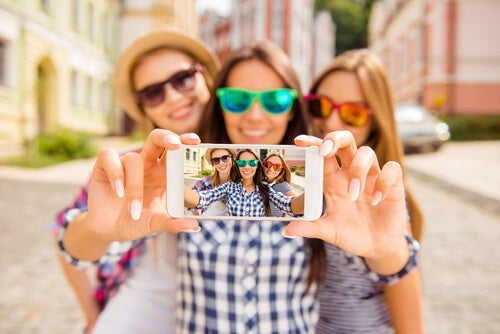 There’s currently a great desire to pretend on social networks. However, are we really as happy as we seem to be in our social media profiles? This question arises from the concept of “happiness,” perhaps fictional, that we must continuously show on our everyday lives and which translates into social networks.

If you browse any social network, you’ll see many posts of acquaintances traveling the world. Or perhaps you’ll see a picture of that friend you haven’t talked to in a few weeks who’s now suddenly in love.

Note that, according to a study on social networks conducted at the University of Pennsylvania, we spend approximately 37 hours online per week. That’s about 22% of our time.

For this reason, according to the study, our personal social life has connections to the social platforms we use on the Internet, to a greater extent. So it’s not surprising that we use these apps to send messages to people close to us.

Posturing in social networks and the need for social approval

We have the flagrant desire to pretend we’re happy and try to make the world believe it, even when it may not really be so.

According to several investigations, there’s a genuine desire to pretend in order to try to please others. This is clear by the need for social approval we display on social networks, according to some studies conducted on the subject.

Therefore, the eagerness to appear on social networks seems to be promoted by an inherent need for social approval. That is, we want others to accept us and give us positive reinforcement. For example, the feeling of well-being that we get when we upload a “selfie”. We obtain reinforcement as we count the likes and flattering comments. Well, who doesn’t like flattery?

Ok, but, what does posturing mean in this regard? “Posturing” is an expression collected by the Oxford Learner’s Dictionaries. It refers to the attitude or behavior that’s not natural or sincere but intended to attract attention or to have a particular effect, particularly on social networks.

Psychologist José Elías, a member of the International Association of Hypnosis, defines the posturing concept as “the adoption of certain habits, gestures, and attitudes that seek to project a good image. An image that receives positive recognition, just to prove we’re happy, even if we aren’t and we’re not even convinced of it”.

In other words, posturing is the need for social approval by showing an image of us that may not be part of reality, according to the psychologist.

According to a study by the University of California, people’s moods change and are conditioned by the posts we see on social networks. Ths, the published content intends to give an image of “contagious happiness”. According to this study, perceiving the joy and well-being of others encourages us to want to reach that state. Thus, it urges us to share similar content, and produce the effect of “contagious happiness” ourselves.

In this regard, the display of “happiness” in social networks spreads like wildfire. It also promotes the desire to have a presence on social networks, to enjoy a continuous wave of “happy” messages and photos.

The desire to pretend – Is what we publish real?

Psychologist Yolanda Pérez says “There’s a little bit of everything. The most frequent are the people who show the truth, the ones who aren’t real and even those who only display half-truths”. The author also adds “we show how handsome and happy we are in an instant. But we only show part of our reality. The day has 24 hours and it’s impossible to be happy and smiling all the time”.

The reality that we project on social networks is probably not entirely complete. This is because it’s impossible to be happy at all times. Life is full of positive and negative emotions, and ignoring the latter will only harm us.

In conclusion, it’s clear that most of what we see on social networks isn’t a reflection of reality. The appearance in social networks is relative, as we explained above. We shouldn’t fall into the mistake of thinking there are people who are ecstatic 24 hours a day. Keep in mind that we all experience sadness and frustration.

Thus, having bad days is part of life and they help us value the good times even more. Remember, nobody’s life is perfect, so don’t let go of your desire to pretend to be someone you’re not.

Psychology Today
Active Ageing - What Is it About?