Do You Know About Wernike-Korsakoff Syndrome? 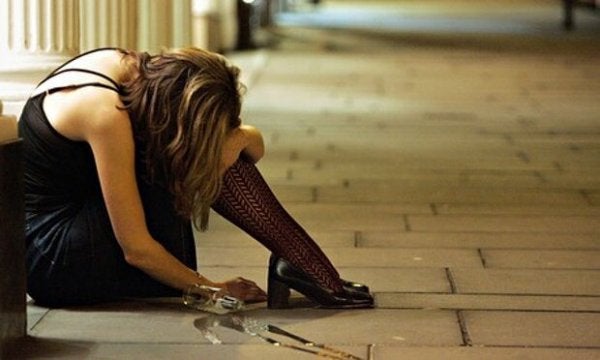 It’s a fact that excessive alcohol intake causes disorders, whether intense or chronic, in our central nervous system. This especially happens in our brain, like with Wernicke-Korsakoff syndrome.

But, this knowledge was not wide-spread until the 19th century. Even today we don’t know the real reasons that consuming alcohol causes some of the brain syndromes it does.

People traditionally thought that the psychopathology of alcohol just consisted of the direct, exclusive consequence the substance had on our central nervous system. But over time,  we’ve seen the repercussions associated with excessive alcohol intake related malnutrition.

These are clearly decisive repercussions when it comes to the appearance of some of these disorders.

Coming up, we’re going to look at one of the most well-known disorders caused by excessive alcohol consumption. Let’s talk about Wernicke-Korsakoff syndrome.

Wernicke’s encephalopathy and Korsakoff’s syndrome are different conditions. But they occur together a lot of the time.

When this happens, we’re talking about Wernicke-Korsakoff syndrome. As we’ll see below, one of its causes is a thiamine (vitamin B1) deficiency.

A lack of vitamin B1 is common in people with alcoholism. But they’re not the only people who get it. It’s also common in people whose bodies don’t properly absorb food (malabsorption). This might happen occasionally as a result of a chronic illness, or after surgery for obesity.

Korsakoff syndrome, or psychosis, tends to develop as the symptoms from Wernicke’s syndrome disappear.

Wernicke’s encephalopathy causes brain damage in the lower regions of the brain, the thalamus and hypothalamus.

Korsakoff’s psychosis comes from the permanent damage in the areas of the brain related to memory.

We’re going to look separately at Wernicke’s encephalopathy and Korsakoff’s amnesia syndrome. That way it’ll be easier to understand what we’re talking about.

Wernicke first described it in 1885. It’s present in chronic alcoholics with nutritional deficiencies. With Wernicke’s encephalopathy, we see symmetrical lesions on the brain structures surrounding the third ventricle, aqueduct, and forth ventricle.

Specifically, these structures are the mammillary bodies, the dorsolateral thalamus, the locus coeruleus, periaqueductal gray matter, the oculomotor nucelus, and the vestibular nucleus.

Also, 50% of cases include lesions on the cerebellum as well, causing a selective loss of Purkinje neurons. Probably the most typical neurological sign of this encephalopathy is the atrophying of the mammillary bodies. This shows up in approximately 80% of all cases.

Clinical observations include patients being disoriented and having problems with attention. Many of them display lower levels of consciousness. And, without treatment, this could lead to coma or death.

There are some other associated symptoms. These are nistagmus (involuntary, rapid, repetitive eye movement), ataxia (difficulty coordinating movements), and ophtalmoplegia (inability to voluntarily move the eye). There could also be lesions on the oculomotor, abducens, and vestibular nuclei.

The disease’s etiology comes from a lack of thiamine, or vitamin B1, as we said earlier. This thiamine deficit is common in people who frequently consume alcohol and have developed a certain dependence on it.

Vitamin B1 deficiencies in alcoholics come from a combination of malnutrition, lower gastrointestinal absorption of this vitamin, and a decrease in the liver’s ability to store and use it. These factors all come from chronic alcohol consumption.

Deficiencies in vitamin B1 processes can have both a genetic or acquired origin. These differences might explain why not all alcohol addicts develop this kind of encephalopathy.

Apathy is also a major characteristic. On the other hand, sensory capabilities and other intellectual capabilities tend to remain in place.

Korsakoff’s amnesiac syndrome can come tied together with Wernicke’s encephalopathy. It shows up in 80% of the patients who have recovered from that kind of encephalopathy.

But Korsakoff’s amnesia has also been seen in people who have never had Wernicke’s encephalopathy.

It’s unusual for non-alcoholics who have had encephalopathy to contract Korsakoff’s syndrome. This means that the neurotoxicity of alcohol has a certain weight when it comes to causing this syndrome.

The neurons most affected by neurotoxic action are the cholinergic neurons in the basal ganglia. These neurons show up in smaller numbers in Korsakoff’s patients.

Thiamine deficits can also cause a loss of neurotransmitters, specifically the ones with a stimulation based on acetylcholine. Therefore a lack of this substance also contributes to memory loss.

Lesions on the mammillary bodies, thalamus, dorsolateral and anterior nuclei can cause equally strong memory loss.

As we’ve seen, the difference between Korsakoff’s syndrome and Wernicke’s encephalopathy isn’t necessarily clear and exact. From a pathological point of view, there’s an overlap of the areas affected by both syndromes.

Because of this lack of a clear boundary between the two illnesses, there are several authors who have suggested using the term “Wernicke-Korsakoff.”

The Thin Line Between Alcoholism and a Habit
One of your friends has been diagnosed with alcoholism. Furthermore, this habit of meeting up every Friday for drinks is part of the problem. Read more »

Link copied!
Interesting Articles
Culture
The Many Benefits of Being Kind

Kindness has the ability to transform our surroundings, and this transformation is beneficial for both those who practice it and…

Culture
Five Strategies to Help You Get Up Early

You've surely heard the saying "The early bird gets the worm." It's true that people who get up early are…